Into a Paris Quartier

Reine Margot's Chapel and Other Haunts of St.-Germain

Description - Into a Paris Quartier by Diane Johnson

As a child, Diane Johnson was entranced by THE THREE MUSKETEERS, dashing 17th-century residents of the famous romantic quartier called St.-Germain-des-Pr's. Now, the paperback edition of her delightful book will take even more Americans to the richly historic part of the city that has always attracted us, from Ben Franklin in the 18th-century to raffish novelist Henry Miller in the 20th.Modern St.-Germain is lively and prosperous, and fifty years ago its heady mix of jazz and existentialism defined urbane cool, but Johnson takes a longer view. "Beside the shades of Jean-Paul Sartre and Edith Piaf," she writes, "there is another crowd of resident ghosts... misty figures in plumed hats whose fortunes and passions were enacted among these beautiful, imposing buildings." From her kitchen window, she looks out on a chapel begun by Reine Margot, wife of Henri IV; nearby streets are haunted by the shades of two sinister cardinals, Mazarin and Richelieu, as well as four famed queens and at least five kings. Delacroix, Corot, Ingres, David, and Manet all lived in St.-Germain; Oscar Wilde died there; and everybody who was anybody visited sooner or later.With her delicious imagination and wry, opinionated voice, Diane Johnson makes a companionable and fascinating guide to a classic neighborhood as cosmopolitan as it is quintessentially French.

Other Editions - Into a Paris Quartier by Diane Johnson 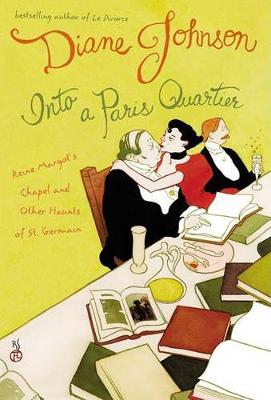 Book Reviews - Into a Paris Quartier by Diane Johnson

» Have you read this book? We'd like to know what you think about it - write a review about Into a Paris Quartier book by Diane Johnson and you'll earn 50c in Boomerang Bucks loyalty dollars (you must be a Boomerang Books Account Holder - it's free to sign up and there are great benefits!)

Diane Johnson is a travel writer, biographer, essayist and--most notably--a novelist and three-time National Book Award Finalist, most recently for Le Divorce, a national bestseller which became a major motion picture. Her next novel, Le Mariage (2000) also made bestseller lists from the Boston Globe to the San Francisco Chronicle, and was a New York Times Book Review "Notable Book" for 2000. Johnson now divides her time between Paris and San Francisco.