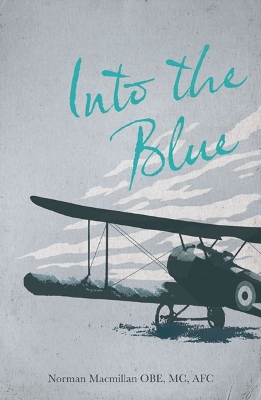 Description - Into the Blue by Norman MacMillan

'Into the Blue' is widely regarded as a literary classic. Originally published in 1929, and 44 years since its latest publication, Grub Street reintroduces you to Norman MacMillan's insightful and gripping book about his experiences as a pilot during the First World War. Wing Commander Norman Macmillan, OBE, MC, AFC, DL, was born on 9 August 1892 in Glasgow. After serving sixteen months in the Highland Light Infantry, he joined the RFC in 1916. He learned to fly at Netheravon, and in 1917 went to 45 Squadron on 11/2 Strutters. Norman flew many missions on this type and claimed two victories before 45 were re-equipped with Camels in August 1917; Norman then gained his first Camel victory in the same month they arrived. On 11th September he twice claimed Fokker Triplanes out of control during two separate engagements in the space of a few minutes. Macmillan went on to claim nine victories in all. After being injured in an unfortunate accident on 6th January 1918 he did not see further combat and returned to England to become a flight instructor. After his experience in the First World War, he was closely associated with flying for many years and also became an enthusiastic writer of aviation books; of which, Into the Blue is the best. In 1925 Norman was the first person to make an emergency landing at Heathrow, which was then a row of cottages. During World War Two he became wing commander war correspondent, before retiring to Cornwall, where he became Deputy Lord Lieutenant of that county. Norman died on 5 August 1976 aged 83. Norman Macmillan was decorated with the Military Cross for conspicuous gallantry and devotion to duty in 1918 and was also later awarded the prestigious Air Force Cross.

Book Reviews - Into the Blue by Norman MacMillan

» Have you read this book? We'd like to know what you think about it - write a review about Into the Blue book by Norman MacMillan and you'll earn 50c in Boomerang Bucks loyalty dollars (you must be a Boomerang Books Account Holder - it's free to sign up and there are great benefits!)