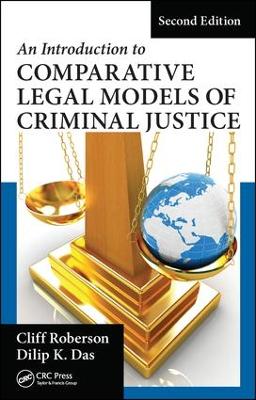 An Introduction to Comparative Legal Models of Criminal Justice

Updated to reflect changes in the criminal justice systems in several countries, An Introduction to Comparative Legal Models of Criminal Justice, Second Edition explores and illustrates the idea that a country's legal model determines the character of its police, corrections, and legal system. It focuses on how law shapes policing, including how it causes police to act as though they are above the law.

Each chapter is designed as an independent unit of study. Along with updates to each chapter, other new additions to the second edition include:

Thorough and concise, An Introduction to Comparative Legal Models of Criminal Justice, Second Edition provides a text covering the different major legal models in the world that is ideal for a one-semester course.

» Have you read this book? We'd like to know what you think about it - write a review about Introduction to Comparative Legal Models of Criminal Justice book by Cliff Roberson and you'll earn 50c in Boomerang Bucks loyalty dollars (you must be a Boomerang Books Account Holder - it's free to sign up and there are great benefits!)

Cliff Roberson, JD, LLM, PhD, is an emeritus professor of criminal justice at Washburn University, Topeka, Kansas, and a retired professor of criminology at California State University, Fresno. He earned his PhD in human behavior at U.S. International University, his LLM in criminal law, criminology, and psychiatry at The George Washington University, and his JD at American University. He is the author or co-author of more than 60 books and texts on legal subjects. He has been associate vice president for academic affairs at Arkansas Tech University, dean of arts and sciences at University of Houston in Victoria, Texas, director of programs at National College of District Attorneys, director of the Justice Center at California State University, and assistant professor of criminal justice at St. Edwards University. He has also been a trial supervisor at the Office of State Counsel for Offenders, Texas Board of Criminal Justice, and judge pro tem in the California courts. Dilip K. Das is a professor of criminal justice, former police chief, the founding editor in chief of Police Practice and Research: An International Journal, and a human rights consultant to the United Nations. He served in the Indian Police Service for 14 years. In 1994, he founded the International Police Executive Symposium (IPES), which enjoys special consultative status in the United Nations. He has authored, edited, and coedited more than 30 books and numerous articles. He is editor in chief of two book series: Advances in Police Theory and Practice and Interviews with Global Leaders in Policing, Courts, and Prisons. He has received several faculty excellence awards and is a distinguished faculty lecturer.

A Preview for this title is currently not available.
More Books By Cliff Roberson
View All