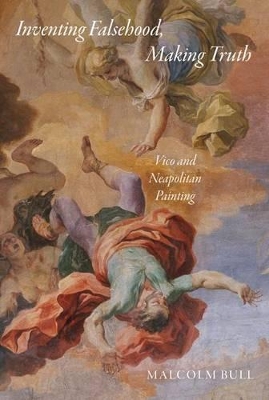 Can painting transform philosophy? In Inventing Falsehood, Making Truth, Malcolm Bull looks at Neapolitan art around 1700 through the eyes of the philosopher Giambattista Vico. Surrounded by extravagant examples of late Baroque painting by artists like Luca Giordano and Francesco Solimena, Vico concluded that human truth was a product of the imagination. Truth was not something that could be observed: instead, it was something made in the way that paintings were made--through the exercise of fantasy. Juxtaposing paintings and texts, Bull presents the masterpieces of late Baroque painting in early eighteenth-century Naples from an entirely new perspective. Revealing the close connections between the arguments of the philosophers and the arguments of the painters, he shows how Vico drew on both in his influential philosophy of history, The New Science. Bull suggests that painting can serve not just as an illustration for philosophical arguments, but also as the model for them--that painting itself has sometimes been a form of epistemological experiment, and that, perhaps surprisingly, the Neapolitan Baroque may have been one of the routes through which modern consciousness was formed.

» Have you read this book? We'd like to know what you think about it - write a review about Inventing Falsehood, Making Truth: Vico and Neapolitan Painting book by Malcolm Bull and you'll earn 50c in Boomerang Bucks loyalty dollars (you must be a Boomerang Books Account Holder - it's free to sign up and there are great benefits!)

Malcolm Bull is university lecturer in fine art at the University of Oxford. His previous books include "Anti-Nietzsche", "The Mirror of the Gods", and "Seeing Things Hidden".

A Preview for this title is currently not available.
More Books By Malcolm Bull
View All