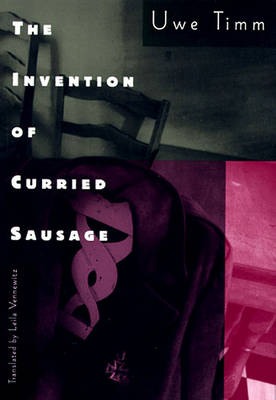 The Invention of Curried Sausage

Description - The Invention of Curried Sausage by Uwe Timm

The Invention of Curried Sausage is an ingenious, revealing, and delightful novel about the invention of a popular German sidewalk food. Uwe Timm has heard claims that currywurst first appeared in Berlin in the 1950s, but he seems to recall having eaten it much earlier, as a boy in his native Hamburg, at a stand owned and operated by Lena Brucker. He decides to check it out. Although the discovery of curried sausage is eventually explained, it is its prehistory - about how Lena Brucker met, seduced and held captive a German deserter in Hamburg, in April, 1945, just before the war's end-that is the tastiest part. Timm draws gorgeous details from Lena's fine-grained recollections, and the pleasure these provide her and the reader supply the tale's real charm.

Book Reviews - The Invention of Curried Sausage by Uwe Timm

» Have you read this book? We'd like to know what you think about it - write a review about Invention of Curried Sausage book by Uwe Timm and you'll earn 50c in Boomerang Bucks loyalty dollars (you must be a Boomerang Books Account Holder - it's free to sign up and there are great benefits!)

Uwe Timm was born in Hamburg, Germany. His first novel, Hot Summer, was published in 1974. New Directions publishes five of his novels, including the German best selling, The Invention of Curried Sausage, and the award winning, Morenga. After apprenticing as a furrier, Timm studied philosophy and philology in Paris and Munich. He is the 1989 winner of the Munich Literary Prize. He has been called an "extraordinary story teller" (The New Yorker) and "one of the best living German Writers" (Kirkus Reviews). Leila Vennewitz was the distinguished translator of Heinrich Boll and other postwar German writers, including Jurek Becker and Martin Walser. She won numerous awards for her translations. She died in 2007.

A Preview for this title is currently not available.
More Books By Uwe Timm
View All