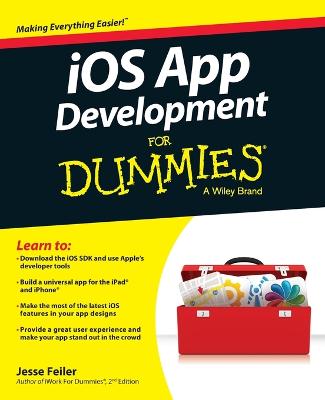 If you?ve got incredible iOS ideas, get this book and
bring them to life!
iOS 7 represents the most significant update to Apple?s
mobile operating system since the first iPhone was released, and
even the most seasoned app developers are looking for information
on how to take advantage of the latest iOS 7 features in their app
designs. That?s where iOS App Development For Dummies
comes in! Whether you?re a programming hobbyist wanting to
build an app for fun or a professional developer looking to expand
into the iOS market, this book will walk you through the
fundamentals of building a universal app that stands out in the iOS
crowd.

Explains the key differences between iPad and iPhone apps and
how to use each device?s features to your advantage

There?s no time like now to tap into the power of iOS
? start building the next big app today with help from iOS
App Development For Dummies!

» Have you read this book? We'd like to know what you think about it - write a review about iOS App Development For Dummies book by Jesse Feiler and you'll earn 50c in Boomerang Bucks loyalty dollars (you must be a Boomerang Books Account Holder - it's free to sign up and there are great benefits!)

Jesse Feiler is a developer, consultant, and author specializing in Apple technologies. He is the creator of Minutes Machine for iPad, the meeting management app, and Saranac River Trail and is heard regularly on WAMC Public Radio for the Northeast?s The Roundtable.

A Preview for this title is currently not available.
More Books By Jesse Feiler
View All