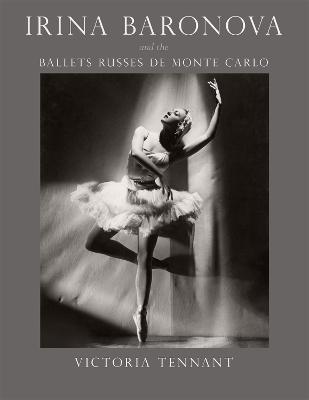 In the 1930s and '40s, the Ballets Russes de Monte Carlo toured the United States and the world, introducing many to ballet as an art form, while spreading the enduring image of the ballerina as an embodiment of feminine grace and sophistication. This sumptuous, illustrated history tells the story of the rise of modern ballet and its popularity through the life story of one of ballet's most glamorous stars, Irina Baronova (1919?2008), prima ballerina for the Ballets Russes de Monte Carlo and later for Ballet Theatre in New York.

Drawing on letters, correspondence, oral histories, and interviews, Baronova's daughter, the actress Victoria Tennant, warmly recounts Baronova's dramatic life, from her earliest aspirations to her grueling time on tour to her later years in Australia as a pioneer of the art. She begins with the Baronov family's flight from Russia during the Revolution, which led them to Romania and later Paris, where at the age of thirteen, Baronova became a star, chosen by the legendary George Balanchine to join the Ballets Russes, where she danced the lead in Swan Lake. ?Tennant provides an intimate account of Baronova's life as a dancer and rare behind-the-scenes stories of life on the road with the stars of the company. Spectacular photographs, a mix of archival images and family snapshots, offer many?rare views of rehearsals, costumes, set designs, and the dancers themselves both at their most dazzling and in their most everyday.

The story of Irina Baronova is also the story of the rise of ballet in America thanks to the Ballets Russes, who brought the magisterial beauty and star power of dance to big cities and small towns alike.? Irina Baronova and the Ballet Russes de Monte Carlo offers a unique perspective on this history, sure to be treasured by dance patrons and aspiring stars.

» Have you read this book? We'd like to know what you think about it - write a review about Irina Baronova and the Ballets Russes de Monte Carlo book by Victoria Tennant and you'll earn 50c in Boomerang Bucks loyalty dollars (you must be a Boomerang Books Account Holder - it's free to sign up and there are great benefits!)

Victoria Tennant played the title role in her first film, The Ragman's Daughter, in 1972, and she has since then gone on to work in film, television, theater, and radio, receiving Emmy and Golden Globe nominations. She lives in Los Angeles.