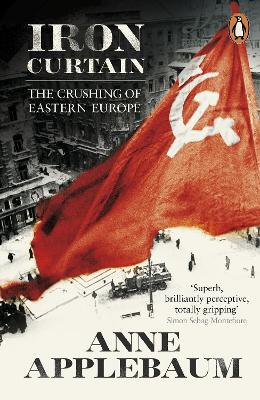 At the end of the Second World War, the Soviet Union unexpectedly found itself in control of a huge swathe of territory in Eastern Europe. Stalin and his secret police set out to convert a dozen radically different countries to a completely new political and moral system- Communism. Anne Applebaum's landmark history of this brutal time shows how societies were ruthlessly eviscerated by Communist regimes, how opposition was destroyed and what life was like for ordinary people who had to choose whether to fight, to flee or to collaborate. Iron Curtain is an exceptional work of historical and moral reckoning, and a haunting reminder of how fragile freedom can be. Chosen 16 times as a 'Book of the Year' - The top Non-Fiction pick of 2012 'The best work of modern history I have ever read.' A. N. Wilson, Financial Times 'The outstanding book of the year . . . a masterpiece.' Oliver Kamm, The Times, Books of the Year 'Exceptionally important, wise, perceptive, remarkably objective.' Antony Beevor 'Explains in a manner worthy of Arthur Koestler what totalitarianism really means . . . it is a window into a world of lies and evil that we can hardly imagine.' Edward Lucas, Standpoint 'At last the story can be told . . . a magisterial history.' Orlando Figes, Mail on Sunday » Have you read this book? We'd like to know what you think about it - write a review about Iron Curtain book by Anne Applebaum and you'll earn 50c in Boomerang Bucks loyalty dollars (you must be a Boomerang Books Account Holder - it's free to sign up and there are great benefits!)

I am a big reader on The Second World War but my reading has never taken me past 1945. Earlier this year I finally read Anna Funder’s Stasiland and was fascinated by what life was like in East Germany so when I saw this book I jumped at the opportunity to read about Eastern Europe in the direct aftermath of World War Two.

Most Cold War histories contend that the Iron Curtain was a reaction to the Marshall Plan of 1947 however Applebaum shows that Soviet plans for an Eastern Bloc were instigated the moment they swept through Eastern Europe in 1944, before the Second Wold War had ended.

Iron Curtain focuses on three Eastern European countries; East Germany, Poland and Hungary. It details their transition from the end of the war to becoming part of the so-called Soviet Bloc. Anne Applebaum has chosen these countries as they each had different experiences and roles in the Second World War which influenced their transition to Communism and in particular Stalinsim.

The transition to Soviet Communism was swift and total. Applebaum details how the Soviet Union literally took over and dominated absolutely every part of society from youth groups to the media, political parties to schools and universities and even art and architecture. The Soviets were systematic and relentless. They initially thought they could win power via elections but when their propaganda and rhetoric failed to capture a majority of votes they turned to vote rigging and the literal crushing of any opposition.

It is hard to believe, almost 70 years later, how the people of Eastern Europe in some cases supported, in others tolerated, the Stalinization of their countries. But Applebaum also explains in depth people’s different reactions to this process. There was much misplaced optimism and hope that a better, utopian Europe could be built from the rubble and ashes of the Second World War. In some cases there was a strident need and desire to position themselves as far from the Nazis as possible. In other cases there was simply exhaustion from being at war for 6 years. Capitalism was also seen as having given rise to Nazism so an alternative was sort. And though opposition was quickly stamped out, people found ways to protest which included wearing particular shirts and ties and even colourful, striped socks.

However following Stalin’s death in 1953 a spell seemed to be lifted and Eastern European countries began to try and exert some autonomy over themselves and to develop their own form of communism. Again this varied from country to country and culminated in the uprising in Hungary which was brutally crushed. Despite appearances that the citizenry of Eastern Europe had fallen into lockstep with Soviet communism and the assumption that the totalitarian regimes had stamped out all opposing views these uprisings showed that the human spirit and its desire for freedom and individual identity can never be completely crushed. Unfortunately The West stood idly by and it would be more than 40 years before another mass movement of resistance to Societ control bubbled to the surface.

This is a highly readable history of a time that has been mythologized by both sides of the Cold War. Applebaum sets the record straight as well as explores one of the most fascinating and brutal social experiments in human history.

Anne Applebaum is the author of several books, including Gulag: A History, which won the 2004 Pulitzer Prize and the Duff Cooper Prize, and Iron Curtain, which in 2013 won the Duke of Westminster's Medal for Military Literature and the Cundill Prize in Historical Literature. She is Professor of Practice at the Institute for Global Affairs, London School of Economics, and a columnist for the Washington Post. She divides her time between Britain and Poland.

Twilight of Democracy: The Failure of Politics and the Parting of Friends
$18.39 $22.99