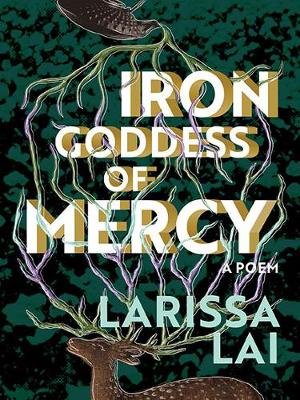 Iron Goddess of Mercy by Lambda Literary Award winner Larissa Lai (for the novel The Tiger Flu) is a long poem that captures the vengeful yet hopeful movement of the Furies mid-whirl and dance with them through the horror of the long now. Inspired by the tumultuous history of Hong Kong, from the Japanese and British occupations to the ongoing pro-democracy protests, the poem interrogates the complicated notion of identity, offering a prism through which the term "Asian" can be understood to make sense of a complex set of relations. The self crystallizes in moments of solidity, only to dissolve and whirl away again. The poet is a windsock, catching all the affect that blows at her and ballooning to fullness, only to empty again when the wind changes direction. Iron Goddess of Mercy is a game of mah jong played deep into the night, an endless gamble.

Presented in sixty-four fragments to honour the sixty-four hexagrams of the I Ching, Iron Goddess of Mercy also borrows from haibun, a traditional Japanese form of travel writing in which each diary entry closes with a haiku. The poem dizzies, turns on itself. It rants, it curses, it writes love letters, but as the Iron Goddess is ever changing, so is the object of her address: a maenad, Kool-Aid, Chiang Kai-shek, the economy, a clown, freedom of speech, a brother, a bother, a typist, a monster, a machine, Iris Chang, Hannah Arendt, the Greek warrior Achilles, or a deer caught in the headlights.

Finally, a balm to the poem's devastating passion and fury, Iron Goddess of Mercy is also a type of oolong tea, a most fragrant infusion said to have been a gift from the compassionate bodhisattva Guan Yin.

Summoning the ghosts of history and politics, Iron Goddess of Mercy explores the complexities of identity through the lens of rage and empowerment.

» Have you read this book? We'd like to know what you think about it - write a review about Iron Goddess Of Mercy book by Larissa Lai and you'll earn 50c in Boomerang Bucks loyalty dollars (you must be a Boomerang Books Account Holder - it's free to sign up and there are great benefits!)


A Preview for this title is currently not available.
More Books By Larissa Lai
View All