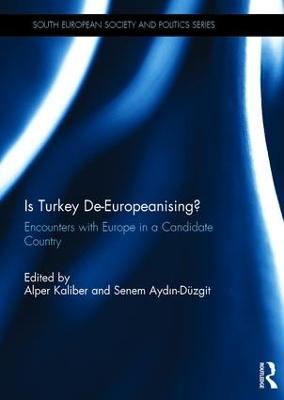 Encounters with Europe in a Candidate Country

This comprehensive edited volume conceptually develops the notion of 'de-Europeanisation' as an important development in the literature on Europeanisation, and applies it specifically to the case of Turkey. 'De-Europeanisation' is defined as the loss or weakening of the EU/Europe as a normative/political context and as a reference point in domestic settings and national public debates of both candidate and member countries. 'De-Europeanisation' manifests itself in two basic ways: as the weakening of the appeal and influential capacity of European institutions, policies, norms and values, leading to a retreat of EU/ Europe as a normative/political context for society and politics in a candidate/member state; and as growing scepticism and indifference in a given society towards the EU/Europe, risking the legitimacy of the EU/Europe as a reference point in cases even where reform is incurred. Using this concept, the authors analyse the diminishing impact of the EU in Turkish governance and politics after the opening of accession negotiations in October 2005. The relevance of 'de-Europeanisation' is investigated through ten chapters focusing on key policy areas including education, migration, democracy, the rule of law and media freedoms, and a number of key actors including civil society organisations, political parties and political leaders.

This book was originally published as a special issue of South European Society and Politics.

Other Editions - Is Turkey de-Europeanising? by Alper Kaliber 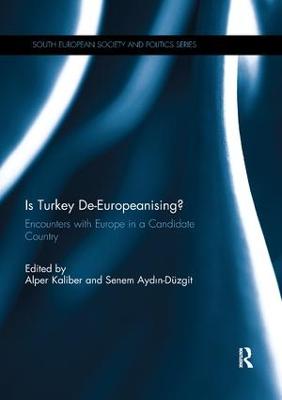 » Have you read this book? We'd like to know what you think about it - write a review about Is Turkey de-Europeanising? book by Alper Kaliber and you'll earn 50c in Boomerang Bucks loyalty dollars (you must be a Boomerang Books Account Holder - it's free to sign up and there are great benefits!)

Alper Kaliber is Associate Professor in the Department of International Relations at Istanbul Kemerburgaz University, Turkey. His areas of research include critical and regional security studies, European security, Europeanisation, the Cyprus conflict, Turkish foreign policy and Ottoman-Turkish modernisation. He has received several grants and awards including the Young Scientist Award from Turkey's Science Academy (BAGEP) in 2014. Senem Aydin-Duzgit is Associate Professor at Sabanci University, Turkey. She is the author of Turkey and the European Union (with Nathalie Tocci, 2015) and Constructions of European Identity: Debates and Discourses on Turkey and the EU (2012).

A Preview for this title is currently not available.
More Books By Alper Kaliber
View All

Is Turkey De-Europeanising?: Encounters with Europe in a Candidate Country
$81.17 $81.99