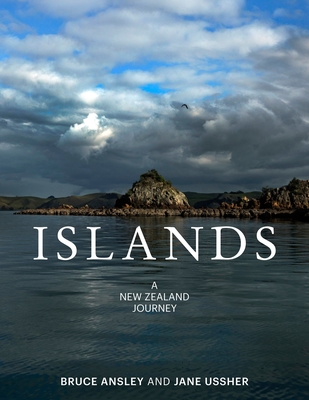 A journey to New Zealand's most fascinating, wild and isolated islands.

Following on from their non-fiction book-of-the-year winning Coast, this is the next epic journey from writer Bruce Ansley and photographer Jane Ussher.

New Zealand is surrounded by hundreds of islands, mainly remnants of a larger land mass now beneath the sea. Some are idyllic retreats; others have poignant histories of castaways, prisons and leper colonies. Some have become sanctuaries, safe from destructive predators; some are farmed by fifth and sixth generations of the same family; others are isolated outposts, barely sustaining life at all; while some are hidden where you'd least expect...

» Have you read this book? We'd like to know what you think about it - write a review about Islands book by Bruce Ansley and you'll earn 50c in Boomerang Bucks loyalty dollars (you must be a Boomerang Books Account Holder - it's free to sign up and there are great benefits!)

Bruce Ansley (Author) Bruce Ansley is one of New Zealand's most esteemed story-tellers. He writes of a New Zealand he loves. He is a keen tramper and has walked over much of the country. He was once a commercial fisherman in Fiordland and a deer farmer on Banks Peninsula; built a house in the far reaches of Pelorus Sound and for many years spent a good part of his life in a tiny, traditional bach in Golden Bay; but has also lived in the four main cities, Dunedin, Christchurch, Wellington and Auckland. He loves the water and will be found out on the water any good day in his Norwegian motor-sailer. Ansley has three sons. He and his wife Sally have moved from their beloved Christchurch to Waiheke Island to be closer to family. Jane Ussher (Illustrator) Jane Ussher is well known and respected for her documentary work as a photographer, and is regarded as one of New Zealand's foremost portrait photographers. For 29 years she was the chief photographer at The New Zealand Listener, after which she took up a career as a freelance photographer. Her work has featured in many books, including collections of her own photographs. In 2008 she visited Antarctica at the invitation of then Prime Minister Helen Clark to document the historic huts of Scott and Shackleton, out of which grew her landmark book Still Life. Her recent book Coast, written by Bruce Ansley, won the Illustrated Non-fiction category of the 2014 NZ Post Book Awards. In 2009 she was made a Member of the New Zealand Order of Merit for services to photography, and was also inducted into the Massey University Hall of Fame. Jane lives in Auckland with her husband, Grant, and son, Nick.

A Preview for this title is currently not available.
More Books By Bruce Ansley
View All