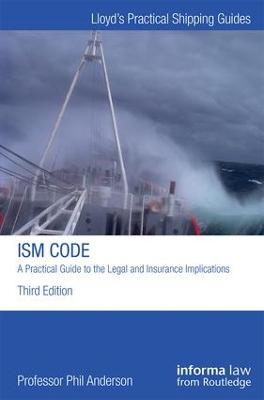 The ISM Code: A Practical Guide to the Legal and Insurance Implications

Description - The ISM Code: A Practical Guide to the Legal and Insurance Implications by Phil Anderson

The ISM Code has been mandatory for almost every commercial vessel in the world for more than a decade and nearly two decades for high risk vessels, yet there is very little case law in this area. Consequently, there remains a great deal of confusion about the potential legal and insurance implications of the Code.

This third edition represents a major re-write and addresses significant amendments that were made to the ISM Code on 1st July 2010 and 1st January 2015.

This book provides practitioners with a practical overview of, and much needed guidance on, the potential implications of failing to implement the requirements of the Code. It will be hugely valuable to DPAs, managers of ship operating companies, ship masters, maritime lawyers and insurance claims staff.

Buy The ISM Code: A Practical Guide to the Legal and Insurance Implications by Phil Anderson from Australia's Online Independent Bookstore, Boomerang Books.

Other Editions - The ISM Code: A Practical Guide to the Legal and Insurance Implications by Phil Anderson 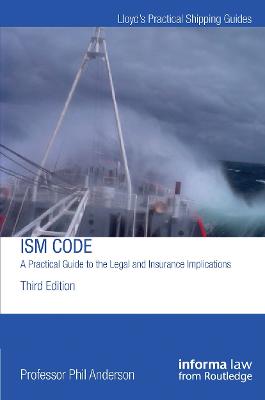 Book Reviews - The ISM Code: A Practical Guide to the Legal and Insurance Implications by Phil Anderson

» Have you read this book? We'd like to know what you think about it - write a review about ISM Code: A Practical Guide to the Legal and Insurance Implications book by Phil Anderson and you'll earn 50c in Boomerang Bucks loyalty dollars (you must be a Boomerang Books Account Holder - it's free to sign up and there are great benefits!)

Book Review: ISM Code: A Practical Guide to the Legal and Insurance Implications by Phil Anderson - Reviewed by GavelBasher (24 Aug 2015)

SUPERB OVERVIEW AND GUIDANCE ON THE ISM CODE: A MUST-HAVE PURCHASE FOR SHIPPING LAWYERS

Maritime safety is the aim of the ISM Code – (International Safety Management Code) -- which every practitioner involved in shipping matters should know about. The Code came into force in July1998 and occasioned the publication of the first edition of this book.

It was duly noted when the first edition was published, that the Code was one of the most important developments in maritime safety to be put in place during the decade of the nineties. (And we all remember the Exxon Valdez disaster of the early nineties). The Code is now mandatory for almost every commercial vessel in the world.

Previous attempts to improve safety and prevent pollution had focused largely on the construction of ships and their equipment. The ISM Code by contrast, concentrates on the way shipping companies and ship operators are run, as many accidents at sea are fundamentally the fault of management. As the ISM Code is basically about good governance, the aim of this book is to help companies achieve increased, or rather, total IMS compliance. The author, Professor Phil Anderson, has been an ISM Code expert witness and/or marine consultant in nearly 150 legal cases around the world where compliance was an issue. Some of the cases were criminal prosecutions; others were civil law actions often resulting from navigational accidents, collisions, personal injuries, pollution incidents and contractual disputes, with subsequent or consequent challenges by insurance companies.

Anderson then goes on to explain why it is -- in view of the 150 cases he refers to -- that so few cases have come before the courts, which is obviously why there is so little case law available in this area. One reason is that many cases went before an arbitration tribunal. Another is that the majority were settled out of court.

The book of course provides all the relevant details which shipping lawyers will certainly find enlightening. It covers, for example, the underlying principles of the ISM Code, the key players and the compliance requirements themselves, together with their legal and insurance implications. Concerning issues which are still the subject of debate, Anderson has made it clear that the opinions which he believes to be correct are specifically his own.

Published by Informa Law from Routledge, the Taylor & Francis Group, as part of their ‘Lloyds Practical Shipping Guides’ series, this book, written by an experienced expert in his field, offers a clear and clearly written approach to this often complex subject and thus fills an important gap in the current literature on matters relating to the ISM Code.

For shipping lawyers and others professionally involved in matters of maritime safety, this book is an important purchase particularly in this latest edition, in view of the many amendments to the ISM Code and other developments that have taken place since the publication of the second edition in 2005.

The publication date is cited as at 2015.

Professor Phil Anderson is widely recognised as one of the world's leading authorities on the ISM Code and marine safety management, and he combines extensive experience as a Master Mariner, a P&I insurance practitioner, an Expert Witness and consultant and as a distinguished academic.

A Preview for this title is currently not available.
More Books By Phil Anderson
View All