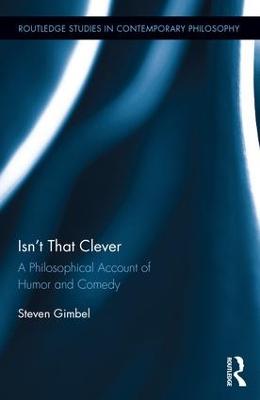 Isn't That Clever provides a new account of the nature of humor - the cleverness account - according to which humor is intentional conspicuous acts of playful cleverness. By defining humor in this way, answers can be found to longstanding questions about humor ethics (Are there jokes that are wrong to tell? Are there jokes that can only be told by certain people?) and humor aesthetics (What makes for a good joke? Is humor subjective?). In addition to humor in general, Isn't That Clever asks questions about comedy as an art form such as whether there are limits to what can be said in dealing with a heckler and how do we determine whether one comedian has stolen jokes from another.

» Have you read this book? We'd like to know what you think about it - write a review about Isn't that Clever book by Steven Gimbel and you'll earn 50c in Boomerang Bucks loyalty dollars (you must be a Boomerang Books Account Holder - it's free to sign up and there are great benefits!)

Steven Gimbel is Professor of Philosophy at Gettysburg College, USA. His paper "Heckler Ethics" received the Joseph Ellin Memorial Prize for best paper given at the seventh annual meeting of the Lighthearted Philosophers' Society. He was also an amateur stand-up comedian for several years, regularly performing at comedy clubs around the Baltimore/Washington D.C. area.

A Preview for this title is currently not available.
More Books By Steven Gimbel
View All