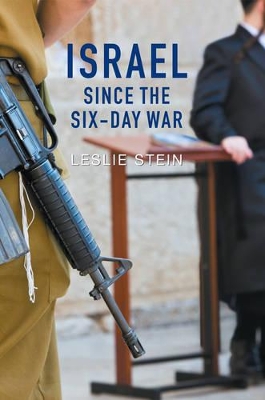 Israel Since the Six-Day War

Tears of Joy, Tears of Sorrow

Description - Israel Since the Six-Day War by Leslie Stein

Completing his acclaimed trilogy on the history of Israel, Leslie
Stein brings readers right up to contemporary events in Israel
Since the Six-Day War. Stein vividly chronicles Israel's wars and
military engagements, but he also incorporates fascinating
assessments of many other issues, including Israel?s economic
development, the nature of the PLO and Palestinian Authority, and
Israeli settlements in the West Bank and Gaza. Furthermore, Stein
explores broader social issues, such as extremist Jewish movements
and the varying fortunes of migrants from Russia and Ethiopia, to
convey clearly a sense of the diversity and complexity of modern
Israel.

Wide-ranging and judicious, Stein's cogent and compellingly
readable account of Israel?s recent past will engage students
and general readers alike.

Book Reviews - Israel Since the Six-Day War by Leslie Stein

» Have you read this book? We'd like to know what you think about it - write a review about Israel Since the Six-Day War book by Leslie Stein and you'll earn 50c in Boomerang Bucks loyalty dollars (you must be a Boomerang Books Account Holder - it's free to sign up and there are great benefits!)

Leslie Stein was educated at the London School of Economics, and was associate professor at Macquarie University, Sydney, Australia until his recent retirement. He is the author of The Hope Fulfilled: The Rise of Modern Israel and The Making of Modern Israel, 1948-1967. He served as the editor of Praeger Press?s series on Israeli and Jewish Studies in 2003-6, and has been an academic visitor to the economics department of the Hebrew University, Jerusalem on a number of occasions.