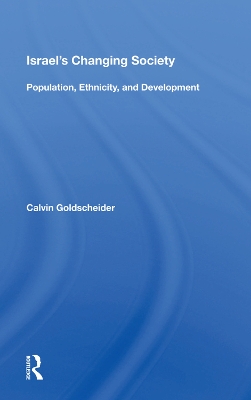 This book provides the most up-to-date assessment of Israel's society today, portraying the country's ethnic diversity, its economy, and demographic changes. Revealing linkages between demographic transformation and socioeconomic change, Goldscheider shows how ethnic group formation emerged in Israel to create the present mix of Jewish and Arab populations. He also reviews the policies of Palestinian and Israeli governments concerning immigration, describing the ways in which socioeconomic development within Israel, urbanization, and industrialization have evolved through the use of outside capital and increasing dependency. The book reveals two unique sets of processes about Israel today. The first concerns important changes in marriage, family and intermarriage, educational attainment and occupational achievement, ethnic politics, religion, and the changing role of women. A second but related concern pertains to the social and economic contexts of community life. Here Goldscheider investigates rapid change among Israel's major urban centers, towns, and agricultural centers, including the Kibbutz as well as Arab communities. In concluding chapters, the author discusses the role of government in shaping population policy, including health, fertility, and contraceptive and abortion issues. He also describes the influence of Jewish communities outside of Israel and the impact of the Middle East conflict with Arab states on Israel's domestic policy as well as the conflict with populations in territories administered by Israel since 1967. Likely to be a standard reference for years to come, the book is essential reading for political scientists, sociologists, anthropologists, and historians concerned with Israel's politics and society. 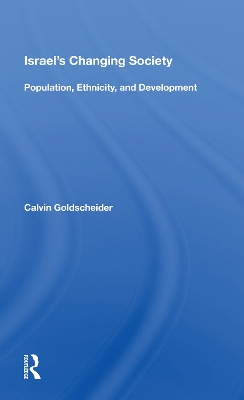 » Have you read this book? We'd like to know what you think about it - write a review about Israel's Changing Society: "Population, Ethnicity, and Development" book by Calvin Goldscheider and you'll earn 50c in Boomerang Bucks loyalty dollars (you must be a Boomerang Books Account Holder - it's free to sign up and there are great benefits!)


A Preview for this title is currently not available.
More Books By Calvin Goldscheider
View All

Urban Migrants In Developing Nations: Patterns And Problems Of Adjustment
$302.40 $336.00