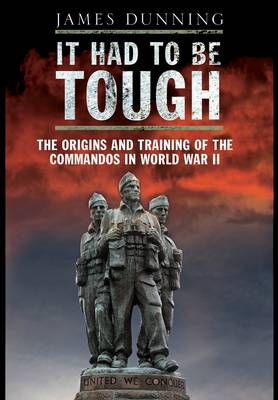 It Had to be Tough

Description - It Had to be Tough by James Dunning

This book tells the fascinating story of the origins of the Commandos (Britain's first Special Service troops and the forerunners of today's Parachute Regiment, the SAS and the SBS) and the development of their special training in World War II. The commandos were raised on the specific and personal orders of the prime minister, Winston Churchill, in the dark days of the summer of 1940 when these islands faced the real threat of a Nazi invasion. It was a bold, but typically Churchillian, decision. The book traces the formation of the Commandos and the development of the extreme and often unorthodox training methods and techniques used to prepare the volunteers from all branches of the British Army for subsequent world-wide-operations from 'bolt and butcher' raids to the 'great raids' on Norway and France and finally their employment in the full scale invasions of North Africa. Sicily, Italy, Normandy, the Crossing of the Rhine and finally in Burma, whilst at all times fostering that indomitable fighting spirit with which the name 'Commando' became synonymous. So great was the Commandos' contribution in that war that the Army Commandos were awarded thirty eight Battle Honours and these are emblazoned on the Commando Flag which hangs in Westminster Abbey. Arguably the Army Commandos were disbanded too hastily after the War but their legacy, traditions and fighting spirit lives with those artillery, engineer and corps troops who today win their coveted 'Green Berets' and serve alongside their comrades of the Royal Marines on active service today. AUTHOR: Jim Dunning is a veteran of the Commandos and a post-war President of the Commando Association. Countess Mountbatten is a former Patron of the Command Association. Her father, who was assassinated in 1981, was the Association's first Patron.

Buy It Had to be Tough by James Dunning from Australia's Online Independent Bookstore, Boomerang Books.

Book Reviews - It Had to be Tough by James Dunning

» Have you read this book? We'd like to know what you think about it - write a review about It Had to be Tough book by James Dunning and you'll earn 50c in Boomerang Bucks loyalty dollars (you must be a Boomerang Books Account Holder - it's free to sign up and there are great benefits!)


A Preview for this title is currently not available.
More Books By James Dunning
View All