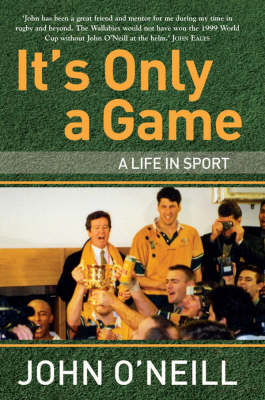 It's Only a Game

A Life in Sport

Description - It's Only a Game by John Newton

"A behind-the-scenes look at the business and fun of sport from the man who has run the Football Federation of Australia and currently heads the Australian Rugby Union John Eales holding the Webb Ellis Cup aloft after Australia s triumph at the 1999 Rugby World Cup. John Aloisi tearing off his jersey after driving home the penalty kick against Uruguay to lead the Socceroos to the 2006 World Cup for the first time in 30 years. Two iconic sporting images of our times, one man at the helm through those and many others. John O Neill, one of the world s leading sports administrators and strategic thinkers, believes in pipedreams those radical ideas that, when articulated, show us what is possible. Having gained business acumen during a successful career with State Bank, John always held rugby union close to his heart, both as a player and a coach. Taking over as CEO of the Australian Rugby Union in 1995, John would lead the revolution of the sport out of the dark ages of amateurism and into its most successful and financially prosperous period ever. He would go on to bring the tournament to Australian soil in 2003 in what many consider to be the best ever World Cup. I

Buy It's Only a Game by John Newton from Australia's Online Independent Bookstore, Boomerang Books.

Book Reviews - It's Only a Game by John Newton

» Have you read this book? We'd like to know what you think about it - write a review about It's Only a Game book by John Newton and you'll earn 50c in Boomerang Bucks loyalty dollars (you must be a Boomerang Books Account Holder - it's free to sign up and there are great benefits!)

A Preview for this title is currently not available.
More Books By John Newton
View All

Cooking with the Oldest Foods on Earth: Australian Native Foods Recipes and Sources
$19.54 $22.99

The Getting of Garlic: Australian Food from Bland to Brilliant, with Recipes Old and New
$28.04 $32.99

Memoirs of the Rev. John Newton: Some Time a Slave in Africa, Afterwards Curate of Olney, Bucks and Rector of St. Mary Woolnoth, London, in a Series of Letters
$83.65 $92.94

Ancient Pagan and Modern Christian Symbolism. with an Essay on Baal Worship, on the Assyrian Sacred Grove and Other Allied Symbols by John Newton
$92.47 $102.74