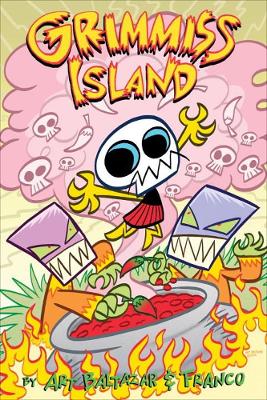 Grimmiss Island spins out of Baltazar and Franco's Grim Reaper comic, part of the Patrick the Wolf Boy world.
When the Volcano Goddess threatens the Mama Woogees' tiny island, only little Grimmiss can save the day! This wacky yarn has it all- hot lava, lost love, and witch doctors! Don't even get us started on the angry cactus, the screenwriting armadillo, and the strange disturbance that has awakened the island's tiki monoliths! When you're little guy with a skull head, there's adventure around every corner! From the Eisner Award-winning creative minds of Art Baltazar and Franco! Tropical drinks not included.

» Have you read this book? We'd like to know what you think about it - write a review about Itty Bitty Comics: Grimmiss Island book by Art Baltazar and you'll earn 50c in Boomerang Bucks loyalty dollars (you must be a Boomerang Books Account Holder - it's free to sign up and there are great benefits!)

Art Baltazar started making comic books with the his self-published comic book, The Cray-Baby Adventures. Since then, he created other comics such as Gyro-Man, Captain Camel & the Space Chicken, Jimmy Dydo, Lunar Lizard, Meteor Mite and Patrick the Wolf Boy. Baltazar has also had a brief tenure with Warner Bros. and had a monthly comic strip in Disney Adventures Magazine titled Gorilla Gorilla. Baltazar has completed a graphic novel titled The Big Amoeba for Platinum Studios. In 2012, Baltazar founded a comic book shop with his partner and co-owner Franco Aureliani. Baltazar was the artist and co-writer with Aureliani of Tiny Titans, for which the two won a 2011 Eisner Award for Best Publication for Kids. They also won an Eisner in 2014 for Itty Bitty Hellboy.

A Preview for this title is currently not available.
More Books By Art Baltazar
View All