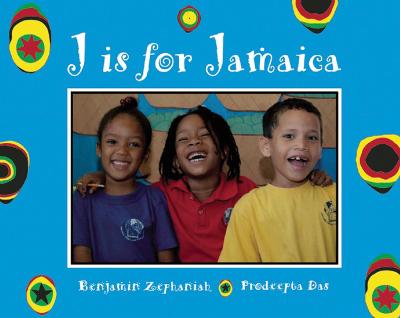 J is for Jamaica

Description - J is for Jamaica by Benjamin Zephaniah

From Cricket to Pumpkin, from Hummingbird to Yam - this is a photographic alphabet showing Jamaica in all its colourful diversity. In vibrant rhyming verse, Benjamin Zephaniah explores some of the sights, sounds and tastes of Jamaica, from the bustling capital of Kingston, to the peaceful and serene Blue Mountain. A perfect way to introduce children to this small and beautiful Caribbean island with a big heart.

Book Reviews - J is for Jamaica by Benjamin Zephaniah

» Have you read this book? We'd like to know what you think about it - write a review about J is for Jamaica book by Benjamin Zephaniah and you'll earn 50c in Boomerang Bucks loyalty dollars (you must be a Boomerang Books Account Holder - it's free to sign up and there are great benefits!)

Dr Benjamin Obadiah Iqbal Zephaniah was born and raised in Birmingham, England. He cannot remember a time when he was not creating poetry but this had nothing to do with school where poetry meant very little to him, in fact he had finished full time education at the age of 13. His poetry is strongly influenced by the music and poetry of Jamaica and what he calls 'street politics'. His first real public performance was in church when he was 10 years old, by the time he was 15 he had developed a strong following in his home town of Handsworth where he had gained a reputation as a young poet who was capable of speaking on local and international issues.He loved Handsworth, he called it the Jamaican capital of Europe but although his work had become popular within the African-Caribbean and Asian community he thought the town was too small, he was not satisfied preaching about the sufferings of Black people to Black people, so he sought a wider mainstream audience. At the age of 22 he headed south to London where his first book Pen Rhythm was published by Page One Books. This was a small, East London based publishing co-operative that were keen on publishing poets who were rooted in their communities. They published Zephaniah when others failed to tune into the new poetry that was about to emerge. The book sold well going into 3 editions but it was in performance that the Dub (Reggae) Poet would cause a revolution, a revolution that injected new life into the British poetry scene and attracted the interest of many mainstream publishers, many of whom had sent refusal letters to him only 12 months earlier.In the early Eighties when Punks and Rastas were on the streets protesting about SUS Laws, high unemployment, homelessness and the National Front, Zephaniah's poetry could be heard on the demonstrations, at youth gatherings, outside police stations, and on the dance floor. It was once said of him that he was Britain's most filmed, photographed, and identifiable poet, this was because of his ability to perform on stage, but most of all on television, bringing Dub Poetry straight into British living rooms. The mission was to take poetry everywhere, he hated the dead image that academia and the establishment had given poetry and proclaimed that he was out to popularise poetry by reaching people who did not read books, those that were keen on books could now witness a book coming to life on the stage. This poetry was political, musical, radical, relevant and on TV.In the nineties his book publications, record releases and television appearances increased in Britain, although he has concentrated on performing outside Europe. He feels at home anywhere the oral tradition is still strong and lists South Africa, Zimbabwe, India, Pakistan and Colombia as some of his most memorable tours. In fact life has been one long tour but this is the only way the oral tradition can live. Over a 22-day period in 1991 he performed on every continent on this planet.Periodically The Benjamin Zephaniah Band takes to the road, the nature of the modern music business means recordings reach places around the globe a lot quicker than the poet does, and this means that many people around the world are more familiar with the poet's music than his performances, plays or books. His only official fan club developed in Malawi in Central Africa and his only Number One Hit Record was in the former Yugoslavia where the Rasta LP was released on the Helidon label. He was the first person to record with the Wailers after the death of Bob Marley in a musical tribute to Nelson Mandela. Free South Africa by Benjamin Zephaniah and the Wailers was recorded at Marley's Tuff Gong Studio in Kingston, Jamaica. Mandela heard the tribute whilst in prison on Robben Island and soon after his release he requested an introductory meeting with Zephaniah, they have now built a relationship which has led to Zephaniah working with children in South

A Preview for this title is currently not available.
More Books By Benjamin Zephaniah
View All