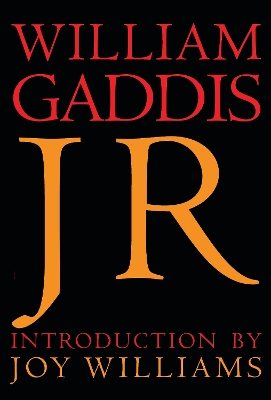 At the center of J R is J R Vansant, a very average sixth grader from Long Island with torn sneakers, a runny nose, and a juvenile fascination with junk mail get-rich-quick offers. Responding to one, he sees a small return; soon, he is a running a massive Ponzi scheme out a phone booth in the school hallway. Everyone from the school staff to the municipal government to the squabbling heirs of a player piano company to the titans of Wall Street and the politicians in Washington will be caught up in the J R Company, an endlessly ballooning bubble that encompasses shaky mineral claims and gas leases, defense contracts, a string of nursing homes cum funeral parlors, matchbooks, marijuana, prostheses, publishing, and even a formula for frozen music.

First published in 1975, J R is an appallingly funny and all-too-prophetic depiction of America's romance with finance and its disastrous consequences. It is also a book about suburban development and urban decay, divorce proceedings and disputed wills, the crumbling facade of Western civilization and the impossible demands of love and art, with characters ranging from the earnest young composer Edward Bast, who inadvertently finds himself the public face of the J R company, to the berserk publicist Davidoff, whose unceasing output of hype and spin and buzz make him one of the great grotesques of modern fiction. Told almost entirely through dialogue, Gaddis's novel is a story of compounding misunderstandings, at once absurd and desperate. It is both a literary tour-de-force and an unsurpassed reckoning with the way we live now.

» Have you read this book? We'd like to know what you think about it - write a review about J R book by William Gaddis and you'll earn 50c in Boomerang Bucks loyalty dollars (you must be a Boomerang Books Account Holder - it's free to sign up and there are great benefits!)


A Preview for this title is currently not available.
More Books By William Gaddis
View All