Boxing in the Shadow of the Global Color Line

In his day, Jack Johnson?born in Texas, the son of former slaves?was the most famous black man on the planet. As the first African American World Heavyweight Champion (1908?1915), he publicly challenged white supremacy at home and abroad, enjoying the same audacious lifestyle of conspicuous consumption, masculine bravado, and interracial love wherever he traveled. Jack Johnson, Rebel Sojourner provides the first in-depth exploration of Johnson's battles against the color line in places as far-flung as Sydney, London, Cape Town, Paris, Havana, and Mexico City. In relating this dramatic story, Theresa Runstedtler constructs a global history of race, gender, and empire in the early twentieth century. 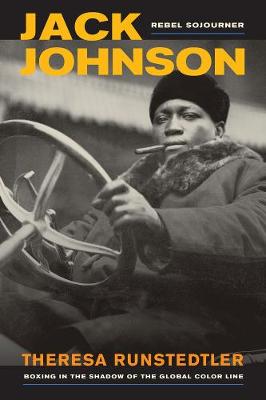 » Have you read this book? We'd like to know what you think about it - write a review about Jack Johnson, Rebel Sojourner book by Theresa Runstedtler and you'll earn 50c in Boomerang Bucks loyalty dollars (you must be a Boomerang Books Account Holder - it's free to sign up and there are great benefits!)

Theresa Runstedtler is Assistant Professor of American Studies at the University of Buffalo.

A Preview for this title is currently not available.
More Books By Theresa Runstedtler
View All