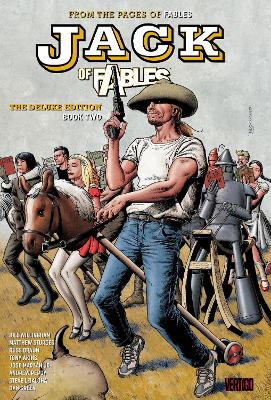 The self-proclaimed World's Greatest Fable is finally given the five-star treatment he so richly deserves in this new hardcover edition. Written by FABLES creator Bill Willingham and Matthew Sturges, Jack is back in JACK OF FABLES- THE DELUXE EDITION BOOK TWO!

Jack is taken back in time to some of his many adventures and misadventures. Jack then takes a trek across the fabled lands of Americana with Humpty Dumpty and Paul Bunyan. His extreme road stories and encounters with other notorious, renegade Fables are just a few of the situations in store! Collects JACK OF FABLES #16-27.

» Have you read this book? We'd like to know what you think about it - write a review about Jack Of Fables The Deluxe Edition Book Two book by Bill Willingham and you'll earn 50c in Boomerang Bucks loyalty dollars (you must be a Boomerang Books Account Holder - it's free to sign up and there are great benefits!)

Bill Willingham has been writing, and sometimes drawing, comics for more than twenty years. During that time he's had work published by nearly every comics publisher in the business, and he's created many critically acclaimed comic book series, including ELEMENTALS, COVENTRY, PROPOSITION PLAYER and FABLES. His work has been nominated for many awards, including the Eisner, Harvey and Ignatz comic industry awards and the International Horror Guild award. Matthew Sturges is the co-writer (with Bill Willingham) of JACK OF FABLES and the monthly comic book HOUSE OF MYSTERY, both from Vertigo. His DC Universe work includes SHADOWPACT, BLUE BEETLE and JUSTICE SOCIETY OF AMERICA.