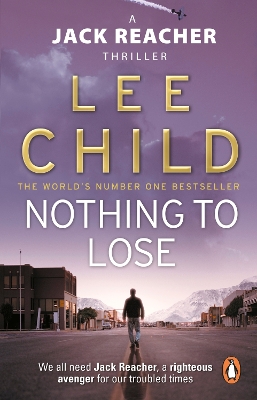 Jack Reacher: #12 Nothing To Lose

Description - Jack Reacher: #12 Nothing To Lose by Lee Child

Two small towns in Colorado- Hope and Despair. Between them, nothing but twelve miles of empty road. Jack Reacher can't find a ride, so he walks. All he wants is a cup of coffee. What he gets are four redneck deputies who want to run him out of town.Mistake. They're picking on the wrong guy. Jack Reacher is a big man, and he's in shape. No job, no address, no baggage. Nothing, except bloody-minded curiosity. What is the secret the locals seem so keen to hide?A hard man is good to find. Ex-military cop Reacher is today's most addictive hero. Now he pulls on a tiny loose thread, to unravel conspiracies that expose the most shocking truths. Because, after all, Jack Reacher has nothing to lose.

Book Reviews - Jack Reacher: #12 Nothing To Lose by Lee Child

» Have you read this book? We'd like to know what you think about it - write a review about Jack Reacher: #12 Nothing To Lose book by Lee Child and you'll earn 50c in Boomerang Bucks loyalty dollars (you must be a Boomerang Books Account Holder - it's free to sign up and there are great benefits!)

Lee Child is British but moved with his family from Cumbria to the United States to start a new career as an American thriller writer. He now divides his time between New York and France. All his thrillers feature Jack Reacher, the former US military cop and maverick drifter, and all have been big international bestsellers.