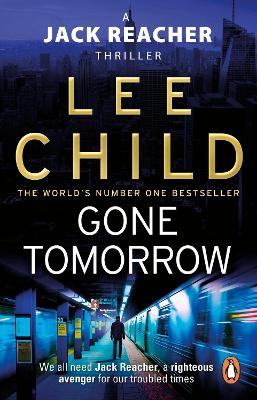 Enhances his status as a mythic avenger. . .You'll be left with a thumping heart and a racing pulse but, be warned, Chapter 63 will give you nightmares." (Evening Standard)

Suicide bombers are easy to spot.
They give out all kinds of tell-tale signs.There are twelve things to look for.No one who has worked in law enforcement will ever forget them.

Will Reacher intervene, and save lives?
Or is he wrong?Will his intervention cost lives - including his own?

Although the Jack Reacher novels can be read in any order, Gone Tomorrow is 13th in the series.

» Have you read this book? We'd like to know what you think about it - write a review about Jack Reacher: #13 Gone Tomorrow book by Lee Child and you'll earn 50c in Boomerang Bucks loyalty dollars (you must be a Boomerang Books Account Holder - it's free to sign up and there are great benefits!)

Lee Child is British, but after he was made redundant from his job in television, he moved with his family from Cumbria to the United States to start a new career as a writer of American thrillers. He now divides his time between France and New York. All his novels feature the maverick Jack Reacher, and all have been international bestsellers.