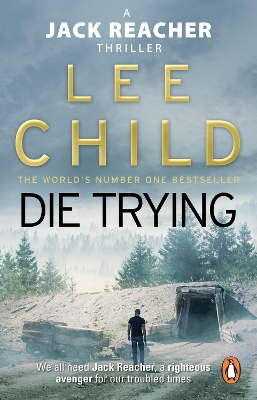 'Cunning, explosive . . . A thumping good read.' Time OutJack Reacher, alone, strolling nowhere. A Chicago street in bright sunshine. A young woman, struggling on crutches. Reacher offers her a steadying arm.And turns to see a handgun aimed at his stomach.Chained in a dark van racing across America, Reacher doesn't know why they've been kidnapped. The woman claims to be FBI. She's certainly tough enough. But at their remote destination, will raw courage be enough to overcome the hopeless odds?Although the Jack Reacher novels can be read in any order, this is the 2nd in the series.

» Have you read this book? We'd like to know what you think about it - write a review about Jack Reacher: #2 Die Trying book by Lee Child and you'll earn 50c in Boomerang Bucks loyalty dollars (you must be a Boomerang Books Account Holder - it's free to sign up and there are great benefits!)

The second Jack Reacher novel, which continues in much the same vain as the first. This time Reacher finds himself in the wrong place at the wrong time.

In this plot Reacher finds himself battling against Neo Nazi militants when he finds himself getting mixed up in a kidnapping. Along with Reacher we are introduced to a young FBI Agent Holly. There is a mystery about why she is wanted and her value in the kidnapping. Like the first book there are a number of interesting plot twists and unexpected turns and ofcourse excessive violence.

Once again Reacher is a entertaining read being a cool character who can think and fight his way out of tough problems.