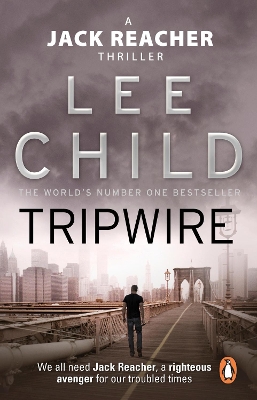 'Lee Child continues his meteoric rise and mastery of suspense with Tripwire. It's a tightly-drawn and swift thriller that gives new meaning to what a page-turner should be.' Michael Connelly

For Jack Reacher being invisible has become a habit.

He spends his days digging swimming pools by hand and his nights as the bouncer in the local strip club in the Florida Keys.

He doesn't want to be found.

But someone has sent a private detective to seek him out. Then Reacher finds the guy beaten to death with his fingertips sliced off. It's time to head north and work out who is trying to find him and why.

Although the Jack Reacher novels can be read in any order, Tripwire is 3rd in the series.

» Have you read this book? We'd like to know what you think about it - write a review about Jack Reacher: #3 Tripwire book by Lee Child and you'll earn 50c in Boomerang Bucks loyalty dollars (you must be a Boomerang Books Account Holder - it's free to sign up and there are great benefits!)