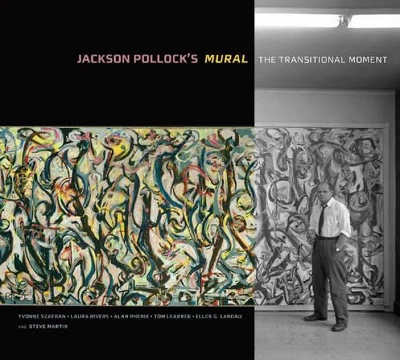 Jackson Pollock's (1912?1956) first large-scale painting, Mural, in many ways represents the birth of Pollock, the legend. The controversial artist's creation of this painting has been recounted in dozens of books and dramatized in the Oscar-winning film Pollock. Rumors-such as it was painted in one alcohol-fueled night and at first didn't fit the intended space-abound. But never in doubt was that the creation of the painting was pivotal, not only for Pollock but for the Abstract Expressionists who would follow his radical conception of art -"no limits, just edges."
?
Mural, painted in 1943, was Pollock's first major commission. It was made for the entrance hall of the Manhattan duplex of Peggy Guggenheim, who donated it to the University of Iowa in the 1950s where it stayed until its 2012 arrival for conservation and study at the Getty Center. This book unveils the findings of that examination, providing a more complete picture of Pollock's process than ever before. It includes an essay by eminent Pollock scholar Ellen Landau and an introduction by comedian Steve Martin. It accompanies an exhibition of the painting on view at the J. Paul Getty Museum from March 11 through June 1, 2014.

» Have you read this book? We'd like to know what you think about it - write a review about Jackson Pollock's Mural - The Transitional Moment book by . Szafran and you'll earn 50c in Boomerang Bucks loyalty dollars (you must be a Boomerang Books Account Holder - it's free to sign up and there are great benefits!)

Yvonne Szafran is senior conservator of paintings at the J. Paul Getty Museum.

A Preview for this title is currently not available.
More Books By . Szafran
View All