"The story of the Cherokee removal has been told many times, but never before has a single book given us such a sense of how it happened and what it meant, not only for Indians, but also for the future and soul of America." -The Washington Post

Five decades after the Revolutionary War, the United States approached a constitutional crisis. At its center stood two former military comrades locked in a struggle that tested the boundaries of our fledgling democracy.

One man we recognize- Andrew Jackson-war hero, populist, and exemplar of the expanding South-whose first major initiative as president instigated the massive expulsion of Native Americans known as the Trail of Tears. The other is a half-forgotten figure- John Ross-a mixed-race Cherokee politician and diplomat-who used the United States' own legal system and democratic ideals to oppose Jackson.Representing one of the Five Civilized Tribes who had adopted the ways of white settlers, Ross championed the tribes' cause all the way to the Supreme Court, gaining allies like Senator Henry Clay, Chief Justice John Marshall, and even Davy Crockett. Ross and his allies made their case in the media, committedcivil disobedience, and benefited from the first mass political action by American women. Their struggle contained ominous overtures of later events like the Civil War and defined the political culture for much that followed.

Jacksonlandis the work of renowned journalist Steve Inskeep, cohost of NPR's Morning Edition, who offers a heart-stopping narrative masterpiece, a tragedy of American history that feels ripped from the headlines in its immediacy, drama, and relevance to our lives. Jacksonlandis the story of America at a moment of transition, when the fate of states and nations was decided by the actions of two heroic yet tragically opposed men.

Other Editions - Jacksonland by Steve Inskeep 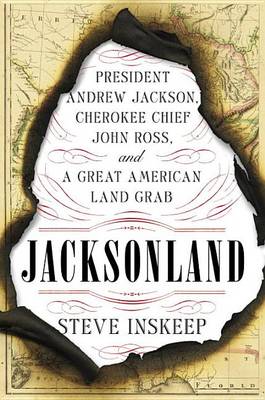 » Have you read this book? We'd like to know what you think about it - write a review about Jacksonland book by Steve Inskeep and you'll earn 50c in Boomerang Bucks loyalty dollars (you must be a Boomerang Books Account Holder - it's free to sign up and there are great benefits!)

Steve Inskeep is a cohost of NPR s"Morning Edition," the most widely heard radio news program in the United States. His investigative journalism has received an Edward R. Murrow Award, a Robert F. Kennedy Journalism Award, and an Alfred I. duPont Columbia University Award. He is the author of"Instant City: Life and Death in Karachi." Follow him on Twitter: @NPRinskeep."

A Preview for this title is currently not available.
More Books By Steve Inskeep
View All

Imperfect Union: How Jessie and John Fremont Mapped the West, Invented Celebrity, and Helped Cause the Civil War
$70.53 $78.37