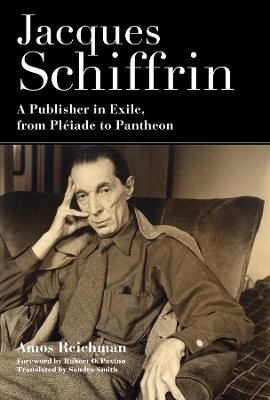 Jacques Schiffrin: A Publisher in Exile, from Pleiade to Pantheon

Description - Jacques Schiffrin: A Publisher in Exile, from Pleiade to Pantheon by Amos Reichman

Jacques Schiffrin changed the face of publishing in the twentieth century. As the founder of Les ??ditions de la Pl??iade in Paris and cofounder of Pantheon Books in New York, he helped define a lasting canon of Western literature while also promoting new authors who shaped transatlantic intellectual life. In this first biography of Schiffrin, Amos Reichman tells the poignant story of a remarkable publisher and his dramatic travails across two continents.

Just as he influenced the literary trajectory of the twentieth century, Schiffrin's life was affected by its tumultuous events. Born in Baku in 1892, he fled after the Bolsheviks came to power, eventually settling in Paris, where he founded the Pl??iade, which published elegant and affordable editions of literary classics as well as leading contemporary writers. After Vichy France passed anti-Jewish laws, Schiffrin fled to New York, later establishing Pantheon Books with Kurt Wolff, a German exile. Following Schiffrin's death in 1950, his son Andr?? continued in his father's footsteps, preserving and continuing a remarkable intellectual and cultural legacy at Pantheon. In addition to recounting Schiffrin's life and times, Reichman describes his complex friendships with prominent figures including Andr?? Gide, Jean-Paul Sartre, Peggy Guggenheim, and Bernard Berenson. From the vantage point of Schiffrin's extraordinary career, Reichman sheds new light on French and American literary culture, European exiles in the United States, and the transatlantic ties that transformed the world of publishing.

Book Reviews - Jacques Schiffrin: A Publisher in Exile, from Pleiade to Pantheon by Amos Reichman

» Have you read this book? We'd like to know what you think about it - write a review about Jacques Schiffrin: A Publisher in Exile, from Pleiade to Pantheon book by Amos Reichman and you'll earn 50c in Boomerang Bucks loyalty dollars (you must be a Boomerang Books Account Holder - it's free to sign up and there are great benefits!)