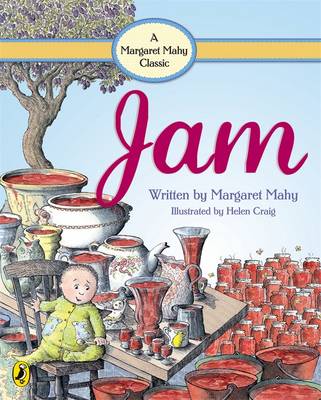 Margaret Mahy's classic story about a father's passion for making plum jam for his long-suffering family, illustrated by Helen Craig.

'The whole house is like a jam factory,' said Clement.
'It's like a school for jam pots,' said Clarissa.
'Your father is a born artist,' said Mrs Castle. 'He is the Picasso of jam makers.'
'But now we must eat it all up,' said Mr Castle firmly.

Mr Castle has discovered that he has a hidden talent - for making plum jam. His wife and children watch with growing wonder as he fills every jar, vase, glass and pot in the house. But where will it all end?

The marvellous Margaret Mahy's delightfully funny story about a family's valiant attempt to deal with nature's generosity is as fresh today as when it was first published in 1985.

Other Editions - Jam by Margaret Mahy » Have you read this book? We'd like to know what you think about it - write a review about Jam book by Margaret Mahy and you'll earn 50c in Boomerang Bucks loyalty dollars (you must be a Boomerang Books Account Holder - it's free to sign up and there are great benefits!)