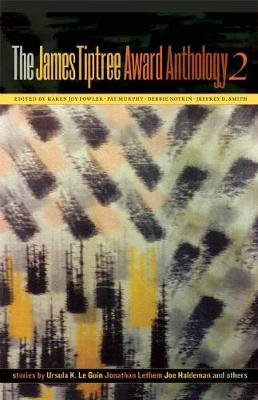 Stories for women, for men, and for the rest of us.
Female, male, gay, bisexual, straight, transgender, human, alien, or simply other, the Tiptree Award honors fiction that explores and expands our notions of gender. This anthology includes the most recent Tiptree winners and short-listed stories plus thought-provoking tales from previous years and essays that continue the conversation. As one of the Tiptree judges said, "I'm damned if I know what gender is, but I do know when a story is about it."
This year's winners, according to juror Cecilia Tan, "stand completely opposed in so many ways you could almost say they define the opposite edges of what is conceivable for the Tiptree. Haldeman, the well-known, Hemingway-esque, male, very American, hard SF writer at one end, and Sinisalo, the European, not well known (in the U.S. and within our genre, I mean), female contemporary-fantasy writer at the other."
Camouflage by Joe Haldeman considers what would happen if a shape-shifting alien predator became, essentially, human. This ageless, sexless entity can take any form. Initially indifferent to gender, the creature faces a gender choice as it grows more human. Haldeman has previously won five Hugo Awards, four Nebula Awards, and the World Fantasy Award.
Johanna Sinisalo's winning novel was published in the United States as Troll: A Love Story (Grove Press, 2004), in the United Kingdom as Not Before Sundown (Peter Owen, 2003), and in Finland as Ennen paiavanlaskua ei voi (Tammi, 2000). "A deft novel of how human society is ruled by complex territorial relationships," Cecilia Tan writes of this novel. Sinisalo has previously won the prestigious Finlandia Prize and is known in her home country for her writing for television and comic strips as well as for her science fiction and fantasy.

» Have you read this book? We'd like to know what you think about it - write a review about James Tiptree Award Anthology 2 book by Karen Joy Fowler and you'll earn 50c in Boomerang Bucks loyalty dollars (you must be a Boomerang Books Account Holder - it's free to sign up and there are great benefits!)

A Preview for this title is currently not available.
More Books By Karen Joy Fowler
View All