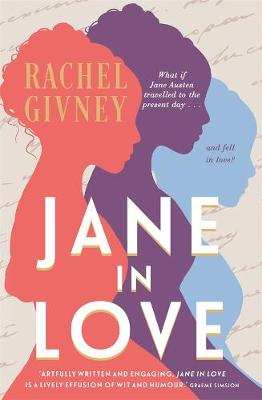 'Artfully written and engaging, Jane in Love is a lively effusion of wit and humour.'
- Graeme Simsion

At age twenty-eight, Jane Austen should be seeking a suitable husband, but all she wants to do is write. She is forced to take extreme measures in her quest to find true love - which lands her in the most extraordinary of
circumstances.

Magically, she finds herself in modern-day England, where horseless steel carriages line the streets and people wear very little clothing. She forms a new best friend in fading film star Sofia Wentworth, and a genuine love interest in Sofia's brother Fred, who has the audacity to be handsome, clever and kind-hearted.

She is also delighted to discover that she is now a famous writer, a published author of six novels and beloved around the globe. But as Jane's romance with Fred blossoms, her presence in the literary world starts to waver. She must find a way to stop herself disappearing from history before it's too late.

A modern-day reimagining of the life of one of the world's most celebrated writers, this wonderfully witty romantic comedy offers a new side to Jane's story, which sees her having to choose between true love in the present and her career as a writer in the past.

'Rachel Givney's Jane in Love is everything I wanted it to be and more. It is a delightful modern-day reimagining of Jane Austen's life, full of rich and nuanced characters... It's one of those books that you finish and then want to shout about to everyone who will listen... Givney has created a modern classic, with all the charm and wit we love about Austen in a gorgeous modern England setting. You'll not be disappointed in this fun, delightful and completely entertaining read. I can only hope we get a movie one day!' - Better Reading

'Jane in Love is pure romp with the playful spirit of fanfic. Rachel Givney is a screenwriter with a highly developed understanding of plot structure and narrative drive, and there are some hilarious scenes as Jane comes to terms with electricity, internet technology, and flush toilets.' The Age

» Have you read this book? We'd like to know what you think about it - write a review about Jane in Love book by Rachel Givney and you'll earn 50c in Boomerang Bucks loyalty dollars (you must be a Boomerang Books Account Holder - it's free to sign up and there are great benefits!)

5 stars Jane In Love is the first novel by Australian filmmaker and author, Rachel Givney. At the age of twenty-eight, Jane Austen, single woman of Bath, is keenly aware that unless she finds a husband, a future as an old maid looms. But she seems more talented at not attracting a man, with her unfeminine interests, her writing, her walks through the countryside and her sartorial inelegance.

After another promising meeting with a young man ends in disappointment, Jane accepts the advice of a poor neighbour woman, who sends her to a matchmaker in London. An unimpressive encounter; Jane returns to Bath with a barely-legible note in her pocket. But when she finally deciphers and recites it, something strange happens…

Attractive, popular and famous, actress Sofia Wentworth has taken a role in a Jane Austen-based movie in the hope of rekindling her failing marriage with her director husband, Jack Travers. But the part turns out to be nothing she wanted and, as she hides in the wings, a young woman in period costume appears amongst the curtains. Clearly some sort of production gimmick. Sofia goes along with it, humours the (rather good, actually) actress with her insistence that she’s Jane Austen.

Fred Wentworth is no actor (he teaches high school history) but, feeling sorry for his sister and her marital problems, he’s reluctantly agreed to be an extra in Sofia’s movie. Which is how he finds himself dancing with an annoying young woman claiming to be Jane Austen. She’s like no other actress he’s met, and she accepts his casual invitation for a drink, but then stands him up.

He’s certainly not expecting to find her asleep in his spare bedroom. It seems that all of their interactions are fated to be laced with irritation, and yet, Fred is drawn to her. Meanwhile, his sister’s bid to win back her husband is being sabotaged by a much younger actress. And as Sofia and Jane try to figure out how to get Jane back to 1803, they notice something strange is happening with Jane’s books…

Time travel and Jane Austen: not just anyone can pull it off, but Givney gives the reader a tale that starts off a bit cute and light-hearted, funny and entertaining, but is at the same time a commentary on twenty-first-century life: the ubiquity of mobile phones and our worship of them; how our many labour-saving and safety devices don’t necessarily make our lives more relaxed or safer; and more.

Jane’s nineteenth century perspective on many aspects of twenty-first century life, both technical and social, is expertly rendered: always perceptive, often amusing and occasionally thought-provoking. For the many things to which we are so very accustomed (either from personal experience or TV): clothing and manners (or lack thereof); escalators; washing machines; TV; the Tube; supermarkets; a defibrillator in action; Givney’s descriptions from Jane’s point of view are quite superb.

Although, now and then, the twenty-first-century characters slip into nineteenth-century-speak, Givney’s portrayal of Austen is sensitive and sympathetic. Austen Purists will no doubt find things in this book about which to complain: this is not a book for those purists. This is a book for people who love Jane Austen and who are grateful that she stuck with writing her books instead of becoming a diligent nineteenth-century wife. Inevitably, there are some seriously lump-in-the-throat, tear-in-the-eye moments at the end and tissues may be required. An outstanding debut novel. This unbiased review is from an uncorrected proof copy provided by Better Reading Preview and Michael Joseph: Penguin Australia.