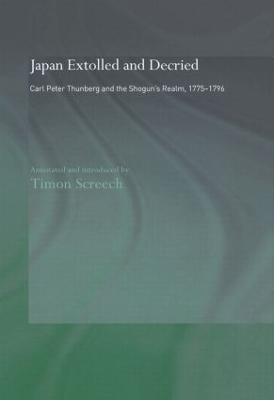 This edition makes available once again Thunberg's extraordinary writings on Japan, complete with illustrations, a full introduction and annotations. Carl Peter Thunberg, pupil and successor of Linnaeus - of the great fathers of modern science - spent eighteen fascinating months in the notoriously inaccessible Japan in 1775-1776, and this is his story.

Thunberg studied at Uppsala University in Sweden where he was a favourite student of the great Linnaeus, father of modern scientific classification. He determined to travel the world and enlisted as a physician with the Dutch East India Company. He arrived in Japan in the summer of 1775 and stayed for eighteen months. He observed Japan widely, and travelled to Edo (modern Tokyo) where he became friends with the shogun's private physician, Katsuragawa Hoshu, a fine Scholar and a notorious rake. They maintained a correspondence even after Thunberg had returned to his homeland. Thunberg's 'Travels' appeared in English in 1795 and until now has never been reprinted.

Other Editions - Japan Extolled and Decried by C.P. Thunberg 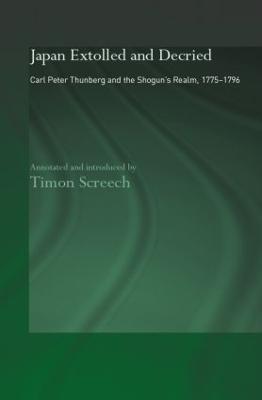 » Have you read this book? We'd like to know what you think about it - write a review about Japan Extolled and Decried book by C.P. Thunberg and you'll earn 50c in Boomerang Bucks loyalty dollars (you must be a Boomerang Books Account Holder - it's free to sign up and there are great benefits!)

Timon Screech is reader in the History of Art at the School of Oriental and African Studies (SOAS), University of London, where he has taught since 1991. He is the author of numerous books on the culture of the Edo period in both Japanese and English.

A Preview for this title is currently not available.
More Books By C.P. Thunberg
View All