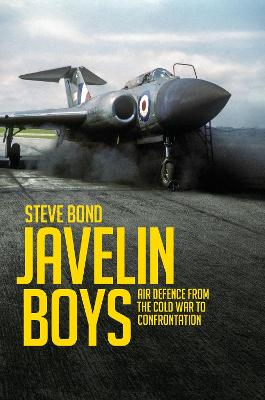 Air Defence from the Cold War to Confrontation

The Gloster Javelin was the UK's first line of night and all-weather air defence both at home and in RAF Germany. In the 1950s, when it replaced the Meteor and Venom, this revolutionary bomber/interceptor became the focus of many great stories told here in terrific detail. With an unorthodox aerodynamic design, the Javelin initially had major production issues, which involved a tendency for engines to self-destruct under certain conditions. Despite this and the criticism it faced its nicknames included 'Flying Flat-Iron' and 'Harmonious Dragmaster' - the aircraft still receives much affection from its former aircrew. Starting from the first deliveries of Javelins in 1956 until the final withdrawal from RAF squadron use in 1968, 'Javelin Boys' describes adventures in Cyprus, Singapore during the Indonesian Confrontation and Zambia during the Rhodesian declaration of UDI. In this period a total of 434 Javelins were built, with their use spanning across eighteen different squadrons. Steve Bond has interviewed a number of veterans, all with captivating tales of their time on the aircraft. Alongside their anecdotes is a detailed history of this unusual aircraft, accompanied by photography never seen before in print. This book is bound to appeal to all aviation fans. REVIEWS: Praise for Steve Bond's other titles, available from Grub Street: For 'Wimpy': 'This book makes a comprehensive record of the Wellington and is well-illustrated by many new or seldom-seen photographs.' - Aeromilitaria 'Bond's tome provides the enthusiast with a long-awaited and very much overdue history and general companion.' - Britain at War Book of the Month November 2014

» Have you read this book? We'd like to know what you think about it - write a review about Javelin Boys book by Steve Bond and you'll earn 50c in Boomerang Bucks loyalty dollars (you must be a Boomerang Books Account Holder - it's free to sign up and there are great benefits!)

An avid aviation enthusiast and historian, Dr Steve Bond has spent most of his working life in the industry. He served in the Royal Air Force for twenty-two years as an aircraft propulsion technician, with tours on the Harrier, VC10, Chipmunk, Bulldog, Hawk and Tornado fleets, concluding his service career on the Eurofighter Typhoon with the MoD. Steve then spent 13 years with City University London as a senior lecturer and course director for the BEng/ MEng Air Transport Engineering and MSc Air Safety Management programmes. He has a PhD in Air Safety Management, is a chartered engineer and a Fellow of the Royal Aeronautical Society. He is also the author of a number of magazine articles and books, including Heroes All, Special Ops Liberators (with Richard Forder) Wimpy and Meteor Boys for Grub Street.