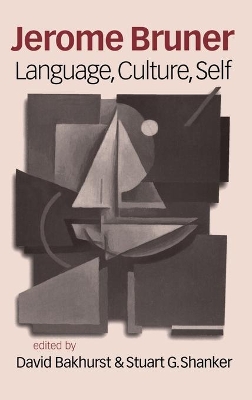 Language, Culture and Self

Jerome Bruner is one of the grand figures of psychology. From his role as a founder of the cognitive revolution in the 1950s to his recent advocacy of cultural psychology, Bruner's influence has been dramatic and far-reaching. Such is the breadth of his vision that Bruner's work has inspired thinkers in many of the major areas of psychology and has had a powerful impact on adjacent disciplines. His writings on language acquisition, culture and education are of profound and enduring importance. Focusing on the dominant themes of language, culture and self, this volume provides a comprehensive exploration of Bruner's fertile ideas and a considered appraisal of his legacy.

With a distinguished list of contributors including Jerome Bruner himself, the result is an outstanding volume of interest to students and scholars in psychology, philosophy, cognitive science, anthropology, linguistics, and education.

Among the contributors are Judy Dunn, Howard Gardner, Clifford Geertz, Rom Harre, David Olson, Edward Reed, Talbot Taylor, Michael Tomasello, and John Shotter. The volume is framed by an editorial introduction that considers the distinctively philosophical dimensions of Bruner's thought, and a final chapter by Bruner himself in which he re-examines prominent themes in his work in light of issues raised by the contributors.

The volume will be invaluable to students and researchers in the fields of psychology, cognitive science, education, and the philosophy of mind.

» Have you read this book? We'd like to know what you think about it - write a review about Jerome Bruner book by David Bakhurst and you'll earn 50c in Boomerang Bucks loyalty dollars (you must be a Boomerang Books Account Holder - it's free to sign up and there are great benefits!)

David Bakhurst works primarily in three areas: Russian Philosophy, philosophicalpsychology, and moral philosophy. In 1991, he published a study of the philosophical culture of the USSR, Consciousness and Revolution in Soviet Philosophy (Cambridge University Press), focused on the life and work of Evald Ilyenkov (1924-79). Ilyenkov, like the renowned psychologist Lev Vygotsky, maintains that each individual mind is formed through initiation into culture. Bakhurst explores this idea in many recent publications and examines parallel views in the thought of such thinkers as Wittgenstein and Jerome Bruner. His ethical writings include several papers on moral realism and ethical particularism. Educated at Keele, Moscow, and Oxford, Bakhurst studied with Jonathan Dancy, Felix Mikhailov, and John McDowell. He has twice held visiting fellowships in Oxford, most recently at All Souls College (2001-02). In 2003, he was appointed to an honorary chair in the School of Education at the University of Birmingham, UK.

A Preview for this title is currently not available.
More Books By David Bakhurst
View All