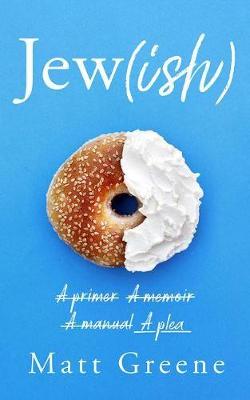 Description - Jew(ish): A primer, A memoir, A manual, A plea by Matt Greene

What does it mean to be Jew(ish) in 2020? Caught between tradition and modernity, between a Jewish family and a non-Jewish son, Matt Greene ponders the big questions concerning identity, religion, family and Seinfeld.

When his son was born to a non-Jewish mother, Matt began to consider the upbringing he'd put behind him-the sense of not belonging, the forbidden foods, the holidays that felt more like punishments. There are more types of Jew than there are bagel fillings, and for every two there are three opinions. But if you're not a black-hatted frummer, if you're allergic to groups, if you observe but don't believe, or you don't observe at all, does that make you less Jewish?

In this wide-ranging series of essays, at turns irreverent, insightful, urgent and iconoclastic, Matt considers what might loosely be termed 'the modern Jewish experience', and asks what it means to be anything in a world obsessed with the self and the other.

'This wise nonfiction meditation on Jewish identity in the twenty-first century and very particularly on Greene's own identity-familial, religious, cultural, held deep in the marrow-also brims over with grief and fury (and bemusement and love). I found it riveting reading.' - Benjamin Dreyer, New York Times bestselling author of Dreyer's English

Buy Jew(ish): A primer, A memoir, A manual, A plea by Matt Greene from Australia's Online Independent Bookstore, Boomerang Books.

Book Reviews - Jew(ish): A primer, A memoir, A manual, A plea by Matt Greene

» Have you read this book? We'd like to know what you think about it - write a review about Jew(ish): A primer, A memoir, A manual, A plea book by Matt Greene and you'll earn 50c in Boomerang Bucks loyalty dollars (you must be a Boomerang Books Account Holder - it's free to sign up and there are great benefits!)


A Preview for this title is currently not available.
More Books By Matt Greene
View All