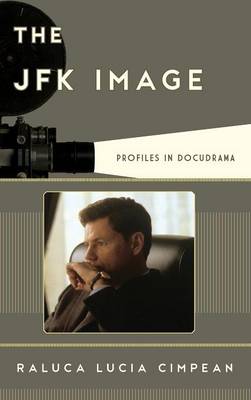 One of the most popular presidents of the twentieth century, John F. Kennedy has been the subject of countless books, documentaries, and portrayals both on television and in feature films. Whether depicting his exploits during World War II (PT-109), capturing crucial moments during his presidency (Thirteen Days), or providing a fictionalized account of his assassination (Executive Action), films continue to portray Kennedy and his legacy.

In The JFK Image: Profiles in Docudrama, Raluca Lucia Cimpean examines John F. Kennedy's representations in motion pictures, focusing on how the late president's image has been constructed to keep the myths of the Kennedy era and Camelot alive. The volume explores those myths through docudramas, which combine the aesthetic and narrative codes of documentaries with those of fiction to portray the characters and events of the Kennedy era as classic battles between good and evil. Beginning with an examination of the docudrama and its uses, this book analyzes the Kennedy image-with its focus on the New Frontier, Camelot, and revisionist approaches-and then provides in-depth examinations of such films as JFK, In the Line of Fire, and The Rat Pack.

Drawing on archival research and Kennedy letters only recently released to the public, The JFK Image will be of great interest to scholars of film and popular culture, as well as those working in political science, the culture of the 1960s, and, of course, Kennedy studies.

» Have you read this book? We'd like to know what you think about it - write a review about JFK Image book by Raluca Lucia Cimpean and you'll earn 50c in Boomerang Bucks loyalty dollars (you must be a Boomerang Books Account Holder - it's free to sign up and there are great benefits!)

Raluca Lucia Cimpean received her PhD in American Studies from Heidelberg University, Germany. She is currently a visiting lecturer at the University of Massachusetts, Boston, where she teaches for the Honors College.