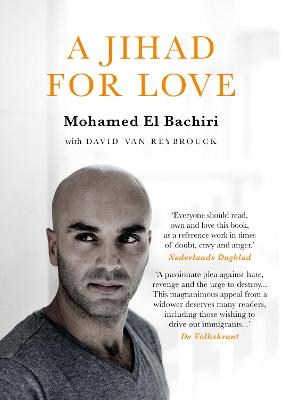 A Jihad for Love

Description - A Jihad for Love by Mohamed El Bachiri

A heartbreaking plea for tolerance and compassion from Mohamed El-Bachiri, who lost his wife Loubna in the Brussels attack of March 2016.

Mohamed El-Bachiri is a Muslim. He lost his wife Loubna in the Brussels bombing of March 2016 - a young woman murdered by a fanatical jihadist. Mohamed was left to bring up their three sons on his own.

Instead of hating or collapsing into grief, he put together a short book of reflections on love, loss and the ways in which we can live together despite differences of religion and ideology.

It is a plea for tolerance and compassion, a rejection of fanaticism, and it is a heartbreaking book. Mohamed El-Bachiri shows how an argument for treating each other with kindness and respect can survive even the most brutal atrocity.

Book Reviews - A Jihad for Love by Mohamed El Bachiri

» Have you read this book? We'd like to know what you think about it - write a review about Jihad for Love book by Mohamed El Bachiri and you'll earn 50c in Boomerang Bucks loyalty dollars (you must be a Boomerang Books Account Holder - it's free to sign up and there are great benefits!)

Mohamed El-Bachiri is a former metro driver from Brussels. His wife Loubna was killed in the Brussels bombing of March 2016, leaving behind three young children. A Jihad for Love topped the Dutch bestseller list a week after publication in March 2017.