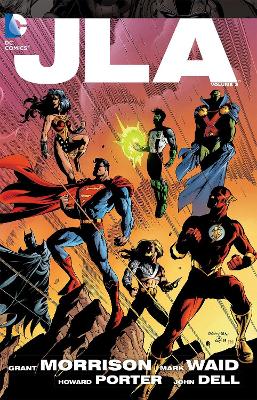 Comics legend Grant Morrison (ALL STAR SUPERMAN, FINAL CRISIS) delivers his unique take on the adventures of the World's Greatest Super-Heroes! The JLA's very first foe, Starro the Conqueror, returns in a new guise as the Star Conquerer!
But help arrives in the form of an unexpected ally- Daniel, The Lord of Dreams, from the pages of THE SANDMAN. And when Earth is threatened by beings of seemingly unlimited power -- beings reminiscent of the genies, and fairies of ancient myth -- members of both the JLA and the JSA rush to answer a challenge that may be beyond their power.

» Have you read this book? We'd like to know what you think about it - write a review about JLA Volume 3 TP book by Grant Morrison and you'll earn 50c in Boomerang Bucks loyalty dollars (you must be a Boomerang Books Account Holder - it's free to sign up and there are great benefits!)

Grant Morrison began his comics career in 1978, with contributions to the short-lived experimental comics magazine Near Myths. This promising start was immediately followed by eight years of poverty and unemployment. In 1986, however, he found himself working for Britain's 2000 AD, for whom he wrote the successful Zenith series. Morrison then found fame with acclaimed runs on ANIMAL MAN and DOOM PATROL, as well as his subversive creator-owned titles such as THE INVISIBLES, SEAGUY and WE3. He has also written best-selling runs on JLA, SEVEN SOLDIERS OF VICTORY and New X-Men, ALL STAR SUPERMAN, 52 and BATMAN