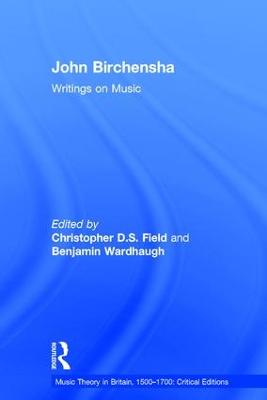 John Birchensha (c.1605-?1681) is chiefly remembered for the impression that his theories about music made on the mathematicians, natural philosophers and virtuosi of the Royal Society in the 1660s and 1670s, and for inventing a system that he claimed would enable even those without practical experience of music to learn to compose in a short time by means of 'a few easy, certain, and perfect Rules'-his most famous composition pupil being Samuel Pepys in 1662. His great aim was to publish a treatise on music in its philosophical, mathematical and practical aspects (which would have included a definitive summary of his rules of composition), entitled Syntagma musicA|. Subscriptions for this book were invited in 1672-3, and it was due to be published by March 1675; but it never appeared, and no final manuscript of it survives. Consequently knowledge about his work has hitherto remained extremely sketchy. Recent research, however, has brought to light a number of manuscripts which allow us at last to form a more complete view of Birchensha's ideas. Almost none of this material has been previously published. The new items include an autograph treatise of c.1664 ('A Compendious Discourse of the Principles of the Practicall & Mathematicall Partes of Musick') which Birchensha presented to the natural philosopher Robert Boyle, and which covers concisely much of the ground that he intended to cover in Syntagma musicA|; a detailed synopsis for Syntagma musicA| which he prepared for a meeting of the Royal Society in February 1676; and an autograph notebook (now in Brussels) containing his six rules of composition with music examples, presumably written for a pupil. Bringing all this material together in a single volume will allow scholars to see how Birchensha's rules and theories developed over a period of fifteen years, and to gain at least a flavour of the lost Syntagma musicA|. 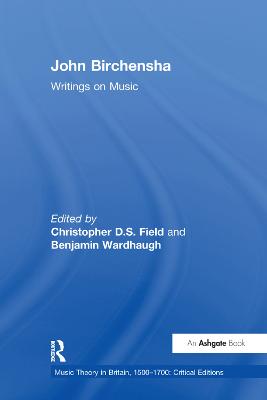 » Have you read this book? We'd like to know what you think about it - write a review about John Birchensha book by Christopher D.S. Field and you'll earn 50c in Boomerang Bucks loyalty dollars (you must be a Boomerang Books Account Holder - it's free to sign up and there are great benefits!)

Dr Christopher D.S. Field, is Honorary Fellow in Music at University of Edinburgh, UK and Dr Benjamin Wardhaugh, is a Ph.D student in History, University of Oxford, UK

A Preview for this title is currently not available.
More Books By Christopher D.S. Field
View All