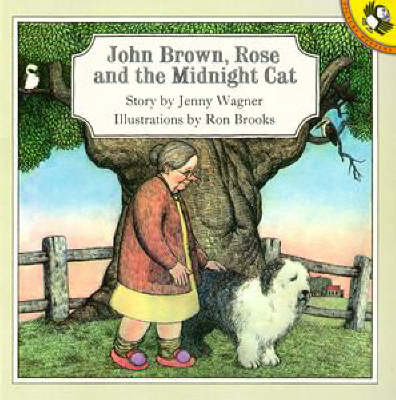 Rose lived with her dog, John Brown. `Just the two of us,' said Rose, until the mysterious midnight cat came along, and things began to change. An award-winning classic tale.

» Have you read this book? We'd like to know what you think about it - write a review about John Brown, Rose & The Midnight Cat book by Jenny Wagner and you'll earn 50c in Boomerang Bucks loyalty dollars (you must be a Boomerang Books Account Holder - it's free to sign up and there are great benefits!)

Jenny Wagner lives with her husband, their dog and three lazy cats in a small Queensland farmhouse that looks like a witch's cottage. The garden is full of possums, lizards, goannas, frogs, scrub turkeys and other birds. Sometimes a couple of wallabies come to visit, too. Jenny likes writing best of all, unless it's going badly, in which case she hates it. She also likes going for walks, listening to classical music, studying languages, doing cryptic crossword puzzles, getting together with friends and putting off the vacuuming. She likes two-minutes noodles with tomato paste stirred in, brussels sprouts and good coffee. She doesn't like racism, cruelty to animals or people, or getting up early. As well as her best-selling novels featuring the nimbin, Jenny Wagner has also written several very successful children's picture books. The Bunyip of Berkeley's Creek and John Brown, Rose and the Midnight Cat both won the Children's Book Council of Australia Book of the Year Ward (Picture Books) and are widely considered to be classics.