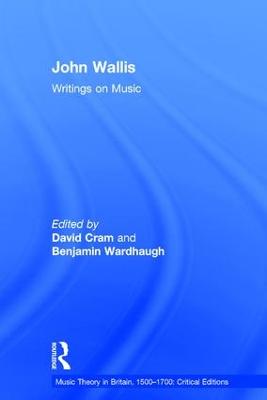 John Wallis (1616-1703), was one of the foremost British mathematicians of the seventeenth century, and is also remembered for his important writings on grammar and logic. An interest in music theory led him to produce translations into Latin of three ancient Greek texts - those of Ptolemy, Porphyry and Bryennius - and involved him in discussions with Henry Oldenburg, the Secretary of the Royal Society, Thomas Salmon and other individuals as his ideas developed. The texts presented in this volume cover the relationship of ancient and modern tuning theory, the building of organs, the phenomena of resonance, and other musical topics. » Have you read this book? We'd like to know what you think about it - write a review about John Wallis book by Benjamin Wardhaugh and you'll earn 50c in Boomerang Bucks loyalty dollars (you must be a Boomerang Books Account Holder - it's free to sign up and there are great benefits!)

David Cram is an Emeritus Fellow of Jesus College, Oxford. His wide-ranging publications on the history of ideas about language in the seventeenth century include a co-edited edition of the works of George Dalgarno. Benjamin Wardhaugh is a Fellow of All Souls College, Oxford, and the author of a number of works on the history of mathematics and its applications. He has edited the writings of Thomas Salmon and co-edited those of John Birchensha for this Ashgate series.

A Preview for this title is currently not available.
More Books By Benjamin Wardhaugh
View All

Encounters with Euclid: How an Ancient Greek Geometry Text Shaped the World
$22.49 $24.99

Reading Mathematics in Early Modern Europe: Studies in the Production, Collection, and Use of Mathematical Books
$249.48 $252.00