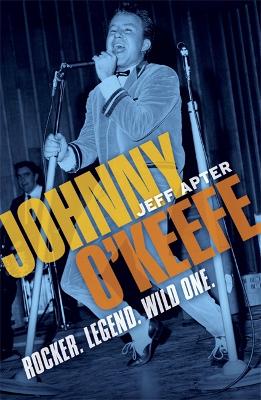 Bill Haley called him 'a future king' of rock. Billy Thorpe idolised him. Fans loved him. We knew him simply as JO'K. Johnny O'Keefe was a human dynamo. Australia's first king of rock'n'roll, his massive influence still looms large on the Australian entertainment landscape. Although O'Keefe suffered as many breakdowns as he did breakthroughs, he played a huge role in establishing the multi-million dollar Australian music industry as we know it today. He was our first and remains our greatest rock'n'roll star. Like his peer Elvis Presley, Johnny died way too young, from a heart attack in 1978, at the age of 43. He left behind a legacy of timeless hits, including 'She Wears My Ring', 'She s My Baby', 'Shout' and 'The Wild One', and recorded thirty-three Top 40 hits during his lifetime. Johnny's role as host of the television shows 'Six O Clock Rock', 'Sing Sing Sing', and 'The Johnny O Keefe Show' still hold a special place in the hearts and minds of his many fans, as do his legendary live performances. Featuring the input of peers and insiders, and written with the full support of the JO'K Trust, this is the definitive story of the man known as the Wild One.

» Have you read this book? We'd like to know what you think about it - write a review about Johnny O'Keefe book by Jeff Apter and you'll earn 50c in Boomerang Bucks loyalty dollars (you must be a Boomerang Books Account Holder - it's free to sign up and there are great benefits!)

Jeff Apter is the author (and co-author) of fifteen books, including A LITTLE BIRD TOLD ME (with Kasey Chambers) and SHIRL: THE LIFE OF GRAEME 'SHIRLY' STRACHAN.