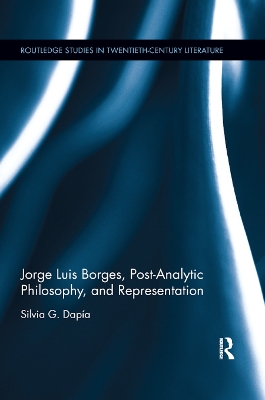 Making an important contribution to studies in Literature and Philosophy, this book reads Jorge Luis Borges philosophically, particularly in reference to his use of representation and reality. Rather than attempting to subordinate Borges to a set of philosophical constructs, to reduce Borges' texts to mere exemplifications or illustrations of philosophical theories, the book uses Borges's short stories to demonstrate how philosophical questions related to representation develop out of literature and actually serve as precursors to the various strains of post-analytic philosophy that later developed in the United States. The volume discusses American post-analytic philosophers Richard Rorty, Hilary Putnam, Donald Davidson, Nelson Goodman, and Arthur Danto, as well as a wide-ranging set of philosophical ideas including reflections on Keynes, Hayek, Schopenhauer and many others . Chapters offer detailed readings of Borges' texts extending from 1939 to 1983, locating where he thematizes issues of representation, and pursuing the logic of Borges's text toward its philosophical implications without neglecting their literary value. The book argues that Borges' exploration of the relationship between representation and reality places him unmistakably in the position of a precursor to the post-analytic philosophers. Illuminating the role that language plays in the creation of reality and representation, this volume makes significant contributions not only to Borges scholarship but also post-structuralism, post-analytic studies of language, semiotics, comparative literature, and Latin American literature. » Have you read this book? We'd like to know what you think about it - write a review about Jorge Luis Borges, Post-Analytic Philosophy, and Representation book by Silvia G. Dapia and you'll earn 50c in Boomerang Bucks loyalty dollars (you must be a Boomerang Books Account Holder - it's free to sign up and there are great benefits!)


A Preview for this title is currently not available.
More Books By Silvia G. Dapia
View All