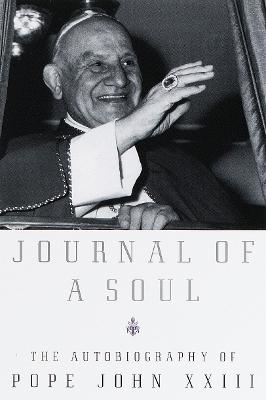 Journal Of A Soul

Description - Journal Of A Soul by Pope John XXIII

No other pope of this century has aroused so much interest and universal affection throughout the world as has Pope John XXIII. Journal of a Soul is an inspiring reading experience that records this pope's thoughts and traces his spiritual development from adolescence to the seminary to a career as a priest, a European papal diplomat, Patriarch of Venice, and finally Pope John XXIII.

This Image Books edition features a biographical portrait of Pope John by his personal secretary, Monsignor Loris Capovilla. It also includes several of his most moving prayers, sixty brief thoughts and aphorisms, his "Rules for the Ascetic Life," many of his letters, even his last will and testament. Christians everywhere will welcome the reissue of "one of the most original, interesting, and inspiring revelations of intimate personal experiences ever written," which "ranks well with the classic spiritual autobiographies" (Critic).

Journal of a Soul, the first ever such work from a Roman pontiff, opens new windows onto the soul of the man himself.

Book Reviews - Journal Of A Soul by Pope John XXIII

» Have you read this book? We'd like to know what you think about it - write a review about Journal Of A Soul book by Pope John XXIII and you'll earn 50c in Boomerang Bucks loyalty dollars (you must be a Boomerang Books Account Holder - it's free to sign up and there are great benefits!)

Among his many accomplishments and triumphs, Pope John XXIII (1881-1963) is celebrated for convening the Second Vatican Council, commonly regarded as the most important event in religious history since the Protestant Reformation of the sixteenth century.

A Preview for this title is currently not available.
More Books By Pope John XXIII
View All

The American Notary and Commissioner of Deeds Manual; The General and Statutory Requirements of Thes
$64.87 $72.08