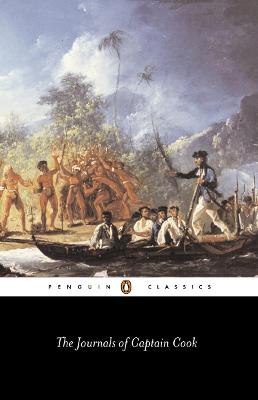 The Journals of Captain Cook

Description - The Journals of Captain Cook by Captain James Cook

Cook led three famous expeditions to the Pacific Ocean between 1768 and 1779. In voyages that ranged from the Antarctic circle to the Arctic Sea, Cook charted Australia and the whole coast of New Zealand, and brought back detailed descriptions of the natural history of the Pacific. Accounts based on Cook's journals were issued at the time, but it was not until this century that the original journals were published in Beaglehole's definitive edition. The JOURNALS tells the story of these voyages as Cook wanted it to be told, radiating the ambition, courage and skill which enabled him to carry out an unrivalled series of expeditions in dangerous waters.

» Have you read this book? We'd like to know what you think about it - write a review about Journals of Captain Cook book by Captain James Cook and you'll earn 50c in Boomerang Bucks loyalty dollars (you must be a Boomerang Books Account Holder - it's free to sign up and there are great benefits!)

Captain James Cook (1728-79) was born in Yorkshire and after an apprenticeship at a shipowners, joined the navy in 1755. Philip Edwards (now retired) has been a professor of English Literature at Trinity College, Dublin, and the universities of Liverpool and Essex. He has written widely on Shakespeare and on the literature of voyages.

A Preview for this title is currently not available.
More Books By Captain James Cook
View All