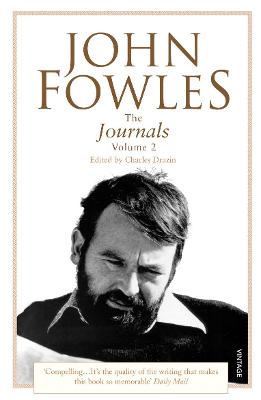 A major literary landmark- the second volume of one of the most extraordinary journals of our time.

The first volume of John Fowles's Journals ended with him achieving international literary renown after the publication of The Collector and The Magus, and leaving London behind to live in a remote house near Lyme Regis. This final volume charts the rewards and struggles of his continuing literary career, but at the same time reveals the often reluctant celebrity behind the outward success.Enjoying a reputation as one of the world's leading novelists, Fowles wins enormous wealth, kudos and attention, has the satisfaction of seeing The French Lieutenant's Woman turned into a highly acclaimed Hollywood film, but none the less comes to regard his fame with deep ambivalence.It cannot repair the growing strains between himself and his wife Elizabeth, who does not share his taste for rural isolation, nor can it cure the disenchantment he feels for an increasingly materialist society.This concluding volume of the Journals marks a writer's continuing quest for wisdom and self-understanding.

» Have you read this book? We'd like to know what you think about it - write a review about Journals Vol II book by John Fowles and you'll earn 50c in Boomerang Bucks loyalty dollars (you must be a Boomerang Books Account Holder - it's free to sign up and there are great benefits!)

John Fowles was born in 1926. His books include The Collector, The Aristos, The French Lieutenant's Woman, The Ebony Tower, Daniel Martin, Mantissa, A Maggot and Wormholes. He died in Lyme Regis in November 2005. Charles Drazin is an editor and writer, whose previous books include In Search of the Third Man and Korda- Britain's Only Movie Mogul