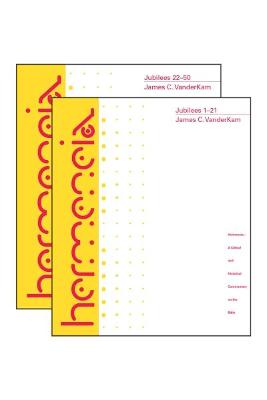 Jubilees: A Commentary in Two Volumes

Jubilees--so called because of its concern with marking forty-nine-year periods (or "jubilees") in Israel`s history--is an ancient rewriting of Genesis and the first part of Exodus from the point of view of an anonymous second-century BCE Jewish author. Its distinctive perspective-as well as its apparent popularity at Qumran-make it particularly important for any reconstruction of early Judaism. James C. VanderKam, the world`s foremost authority on Jubilees, offers a new translation based on his own critical editions of all the available textual evidence, including the Hebrew fragments preserved at Qumran (which he first published in Discoveries in the Judean Desert, vol. 13), as well as the first full running commentary on the book in the English language. Jubilees approaches the book as a rewriting of scripture but also as a literary work in its own right. The commentary explains the text and the teachings of the author with comprehensive coverage of the modern scholarship devoted to them. The introduction sets the book in its second-century BCE context, traces its sources in the Bible and in other early Jewish texts, and describes its influence on Jewish and Christian writers.

» Have you read this book? We'd like to know what you think about it - write a review about Jubilees: A Commentary in Two Volumes book by James C. VanderKam and you'll earn 50c in Boomerang Bucks loyalty dollars (you must be a Boomerang Books Account Holder - it's free to sign up and there are great benefits!)


A Preview for this title is currently not available.
More Books By James C. VanderKam
View All