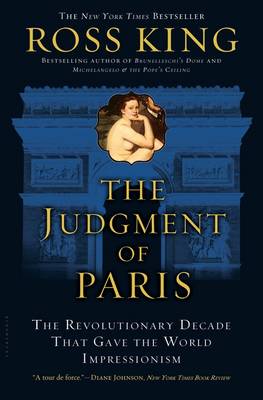 The Judgment of Paris

The Revolutionary Decade That Gave the World Impressionism

Description - The Judgment of Paris by Ross King

While the Civil War raged in America, another revolution took shape across the Atlantic, in the studios of Paris: The artists who would make Impressionism the most popular art form in history were showing their first paintings amidst scorn and derision from the French artistic establishment. Indeed, no artistic movement has ever been quite so controversial. The drama of its birth, played out on canvas and against the backdrop of the Franco-Prussian War and the Commune, would at times resemble a battlefield; and as Ross King reveals, it would reorder both history and culture, and resonate around the world.

Book Reviews - The Judgment of Paris by Ross King

» Have you read this book? We'd like to know what you think about it - write a review about Judgment of Paris book by Ross King and you'll earn 50c in Boomerang Bucks loyalty dollars (you must be a Boomerang Books Account Holder - it's free to sign up and there are great benefits!)

Ross King is the author of the bestselling Brunelleschi's Dome and Michelangelo & the Pope's Ceiling, as well as the novels Ex-Libris and Domino. He lives in England, near Oxford.

A Preview for this title is currently not available.
More Books By Ross King
View All