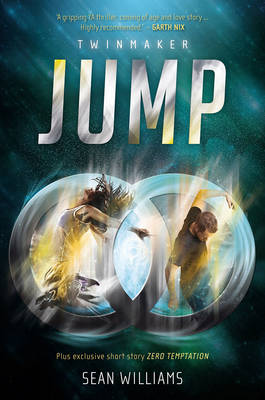 Clair lives in a world revolutionised by d-mat, a global teleport system that allows people to transport themselves instantaneously around the world. When a coded note promises Improvement - the chance to change your body any way you want, making it stronger, taller, more beautiful - Clair thinks it's too good to be true, but her best friend, Libby, is determined to give it a try.

What starts as Libby's dream turns into Clair's nightmare when Libby falls foul of a deadly trap. With the help of Jesse, the school freak, and a mysterious online friend called Q, Clair's attempt to protect Libby leads her to an unimagined world of conspiracies and cover-ups. Soon her own life is at risk, and Clair is chased across the world in a desperate race against time.

» Have you read this book? We'd like to know what you think about it - write a review about Jump: Twinmaker 1 book by Sean Williams and you'll earn 50c in Boomerang Bucks loyalty dollars (you must be a Boomerang Books Account Holder - it's free to sign up and there are great benefits!)

Sean Williams was born in the dry, flat lands of South Australia, where he still lives with his wife and family. He has been called many things in his time, including 'the premier Australian speculative fiction writer of the age' (Aurealis), the 'Emperor of Sci-Fi' (Adelaide Advertiser), and the 'King of Chameleons' (Australian Book Review) for the diversity of his output. That award-winning output includes forty novels for readers all ages, eighty short stories across numerous genres, the odd published poem, and even a sci-fi musical. He is a multiple recipient of the Aurealis and Ditmar Awards in multiple categories and has been nominated for the Philip K. Dick Award, the Seiun Award, and the William Atheling Jr. Award for criticism. He received the 'SA Great' Literature Award in 2000 and the Peter McNamara Award for contributions to Australian speculative fiction in 2008. Also see: seanwilliams.com

The Ethnomusicologists' Cookbook, Volume II: Complete Meals from Around the World
$226.80 $252.00